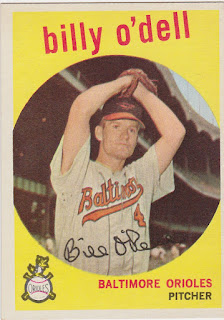 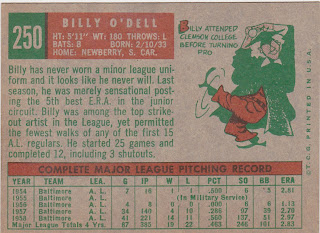 Been awhile since I've posted an Oriole. Billy O'Dell is one of those guys I always associate with the O's but actually had a bigger impact with another team or teams. He was a 1954 bonus signee of the Orioles and never pitched in the minors.

A couple of brief turns with the Orioles bracketed a military service stretch and in 1957 he gained a semi-regular job on the Oriole staff pitching in 35 games. He was a front liner with the club the next two seasons and made the All Star Game both years. But manager Paul Richards had O'Dell shuffling between a starting slot and the bullpen and O'Dell wanted a job doing one or the other, not both.

He was dealt to the Giants after the 1959 season and pitched for five seasons on the West Coast, mostly successfully. He won 19 games for the pennant winning Giants in 1962. That year he got his only post-season work with a start and two relief appearances in the World Series. He started and lost Game One of the Series, picked up a save in Game Four and nearly was the winner in the final game as he closed out the game and watched Willie McCovey's line drive rocket into Bobby Richardson's glove. Maybe a foot either way and Willie Mays scores on a single and O'Dell has a win and a ring. O'Dell discusses the Series, that 7th game and much more in an interview on the Baseball Savvy blog.

After a couple more seasons of slowly declining numbers with the Giants he was traded to the Braves and then finished with the Pirates before retiring after the 1967 season.

This card is (all together now) seriously mis-cut but to me it is a classic '59 Topps with the wind-up pose and the unmistakable Yankee Stadium facade in the background.

Posted by Commishbob at 6:37 AM