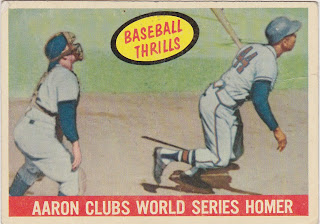 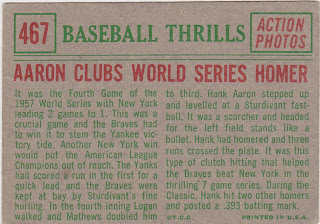 Indeed Hank Aaron clubbed a homer in the 1957 World Series. Three of them in fact. But this card doesn't actually depict any of those. If fact this isn't a shot of a homer, or even of the '57 Series.

I've learned that a little detective work can reveal Topps' propensity to, well, if not actually try to deceive anyone, but 'fudge' the details of the pics used in these Baseball Thrills cards to fit the story. And sure enough that's the case here. I googled 'hank aaron 1957 world series' images, 'aaron homer 1957' and a bunch of variations of those. Figured I'd find the original picture that was colorized for this card. No dice.

On a whim, since the Braves and Yanks had met again in the '58 Series, I changed the date to 1958 and bingo, there it was as the first hit. Clicking through revealed the truth. Sure enough this was a picture from Game Five of the 1958 Series. But even Corbis can't get the details exactly straight. Or maybe Baseball Reference is wrong because they list Hank Aaron's at bats in that game as a flyball to center, a flyball to left and two strikeouts. From the pic it's a little hard to say which at bat this really is. Hank seems to be looking towards left while Yogi looks to center. Doesn't matter. I'm happy to have figured it out. Here is the original shot for those reluctant to follow links. 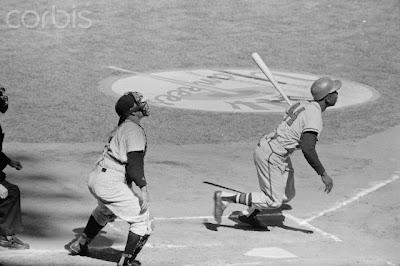 Nice card no matter the origin of the original photo. Also of note if that Topps painted out the Yankee logo that was placed on the Yankee Stadium turf just to the left of home plate.
Posted by Commishbob at 6:25 AM