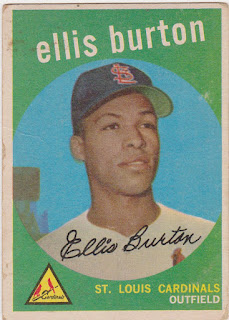 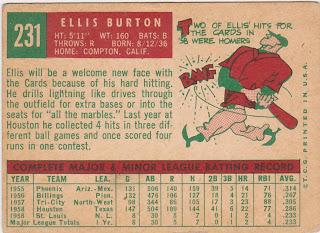 Switch-hitting outfielder Ellis Burton played for three different clubs but was a player in that many more organizations. He was originally signed by the Pirates in 1955 but was claimed by the Cards before he could make it to Pittsburgh. He showed plenty of promise with the bat in the minors and got a look with St. Louis in 1958. As the cardback notes he hit two homers among seven hits in his September call-up.

After spending 1959 in the minors he made the Cards in 1960 but was farmed out in June after not hitting much. He was dealt to Toronto of the International League and then obtained by Milwaukee, then drafted by Houston and was purchased by the Indians on the eve of the '63 season. That led to his next and best major league stint as he made the Indians opening day roster but was sold to the Cubs late in May.

He played a combined 114 games with the two clubs in '63 and hit 13 homers with a .227 batting average. He bounced back and forth between the Cubs and AAA for a couple of years as his numbers slid off the cliff. He was out of baseball after 1965.

This is one of the lesser conditioned cards in my set. I'll get around to upgrading it someday but in the meanwhile it's in acceptable shape for my binder.
Posted by Commishbob at 12:26 PM