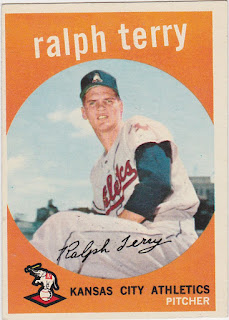 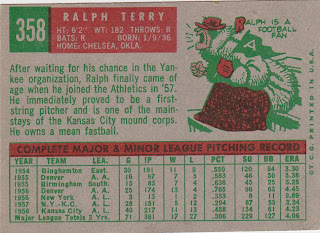 Oklahoma native Ralph Terry holds a unique place in baseball lore. He gave up Bill Mazeroski's dramatic 1960 Series winning homer. But two years later he won the deciding game of the '62 Series over the Giants. He pitched a four hit 1-0 shutout getting the final out on a rocket off the bat of Willie McCovey (like Maz, a Hall of Famer to be). McCovey's shot came with the winning run in scoring position but was flagged down by Bobby Richardson and my Yankee fan friends were very happy at school the next day.

Terry pitched in five different Series' for the Yanks in his career and went 2-3 in nine games. His career mark is better than that. He went 107-99 in 12 seasons. He was originally a Yankee prospect and came up to the big leagues with them in 1956 for a brief look. In June of '57 he took the well traveled road to Kansas City and stayed with the A's until May of 1959 when the Yanks decided they needed him back and back to the Bronx he came.

The Yanks jettisoned him in '65 and he went on the win 11 games for the Indians. That was his last hurrah and Terry finished with another brief whirl in KC and some time with the Mets. By then Terry, an outstanding golfer, heard the call of the fairways and his career changed from the mound to the tee box. He qualified for PGA events in the early 1980s and was a regular on the PGA's Champions Tour.

Nice corners and a bright colorful card. It's a favorite of mine. I saw a lot of Terry at Yankee Stadium back in the day. But couldn't Topps have had a better cartoon blurb than one touting Terry as a football fan?
Posted by Commishbob at 8:44 AM