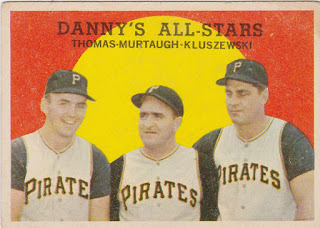 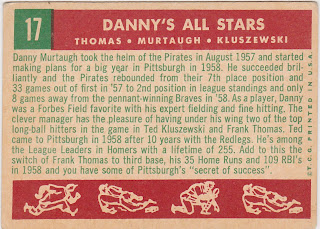 I hate to say it but this card has all the earmarks of being a 'filler' card in the Topps '59 set.

Frank Thomas (aka "The Original One") was an All Star in 1958. But he was a Red Leg by the time this card was issued in the 1959 first series of Topps cards.

Big Klu was a four time All Star in the Fifties but those were as a Red Leg and he was in decline as a batter in 1959. He had been beset by injuries by the time he arrived in Pittsburgh.

I've said it before, but why would Topps crop these special cards like this and place the subjects on a solid background? The outer frame around a complete picture would have been much more interesting.

This is not a very good copy, either. A little stained, a little soft. And it'll stay that way. No upgrades for Danny's All Stars.

Posted by Commishbob at 7:21 AM