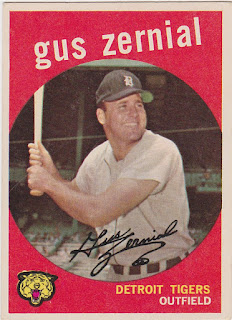 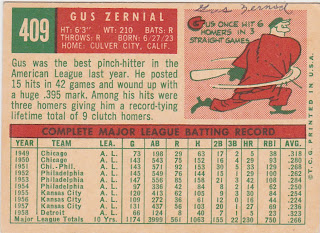 I've never really appreciated Gus Zernial until now. His prime came in the first half of the 50s. And it really was a nice run for Zernial. Signed in 1942 by Cleveland out of Beaumont High School (about an hour east of my home) 'Ozark Ike' had a partial year of minor league ball before spending three years serving his country during WWII. Returning to his career in 1946 he was sold to the White Sox in '47 and debuted with them in 1949.
An injury that year limited his playing time but he established himself as a slugger in 1950, hitting 29 homers and .280. A three way deal early in the 1951 season sent Zernial to the A's and he continued his slugging ways as he led the league in home runs (33), runs batted in (129), extra base hits (68), and 17 assists an an outfielder. His powerful arm made Gus more than just a threat at the plate. He had a reputation as a guy who could charge a ball in left and throw quickly and accurately. I was surprised to find that Zernial, in that '51 season, became the first player since Jimmie Foxx in 1933 to lead the league in both homers and RBI. He was the first player to win a home run and RBI crowns after being traded in that season.
Zernial continued belting homers for the A's, both in Philly and Kansas City through the 1957 season. Zernial's playing time (and batting average) declined in 1956/57 and he was dealt to the Tigers for the 1958 season and played his final two seasons in Detroit before retiring to the Fresno area.
After retirement Zernial was a local broadcaster for Fresno State football, basketball and baseball games before getting involved in the city's efforts to build a new stadium and bring in the Grizzlies. He became a member of the Philadelphia Athletics' All-Century Team in 2002. This article from the Fresno Bee contains a lot of info from Gus' post career years and a wonderful picture of him behind a radio mike.
Some Zernial based Hollywood trivia: In 1952 with the Athletics, according to Joe DiMaggio biographer Ben Cramer, Zernial took publicity photos with Marilyn Monroe at the request of a movie studio. The retired DiMaggio wondered how a guy like Zernial could get his photo taken with somebody like Monroe. Zernial told DiMaggio how to get in touch with her, a blind date was arranged and the rest is baseball/romance history.
When I scanned this card (love the happy look on Gus' face) I noticed that someone, a kid maybe, had practiced his Gus Zernial signature on the back with a pen. Have a look: 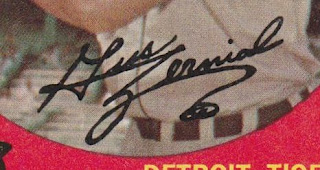 Looks very close, yes? And I had to dig up a copy of his 1952 card on eBay. Posted below. Here is the story via Wikipedia:

Zernial is featured in one of the most unusual baseball cards of all time. His 1952 Topps card shows Zernial holding a bat that has six baseballs attached to it. This photo recognized that he had tied an American League record by hitting six home runs in three consecutive games from May 13-16, 1951. The day after the picture was taken, he hit his seventh home run in a fourth consecutive games. 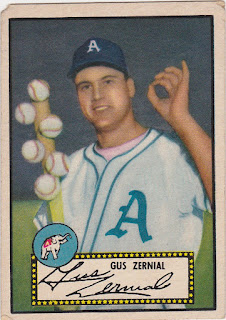 I found the original shot online: 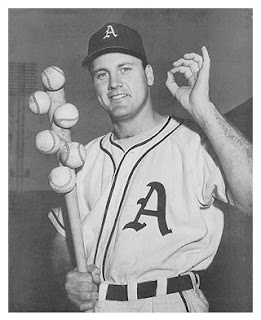 Finally here is an Ozark Ike comic cover. The Ike character was the inspiration for Gus' nickname given to him by a sportswriter. Watch that hand there big fella! 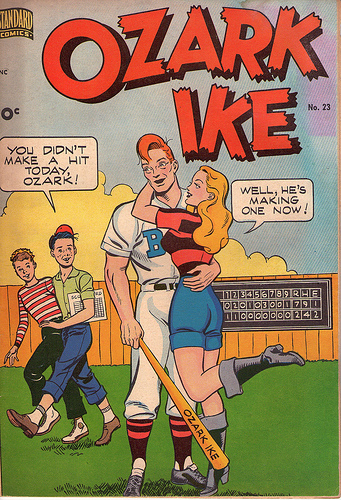 Posted by Commishbob at 7:48 AM