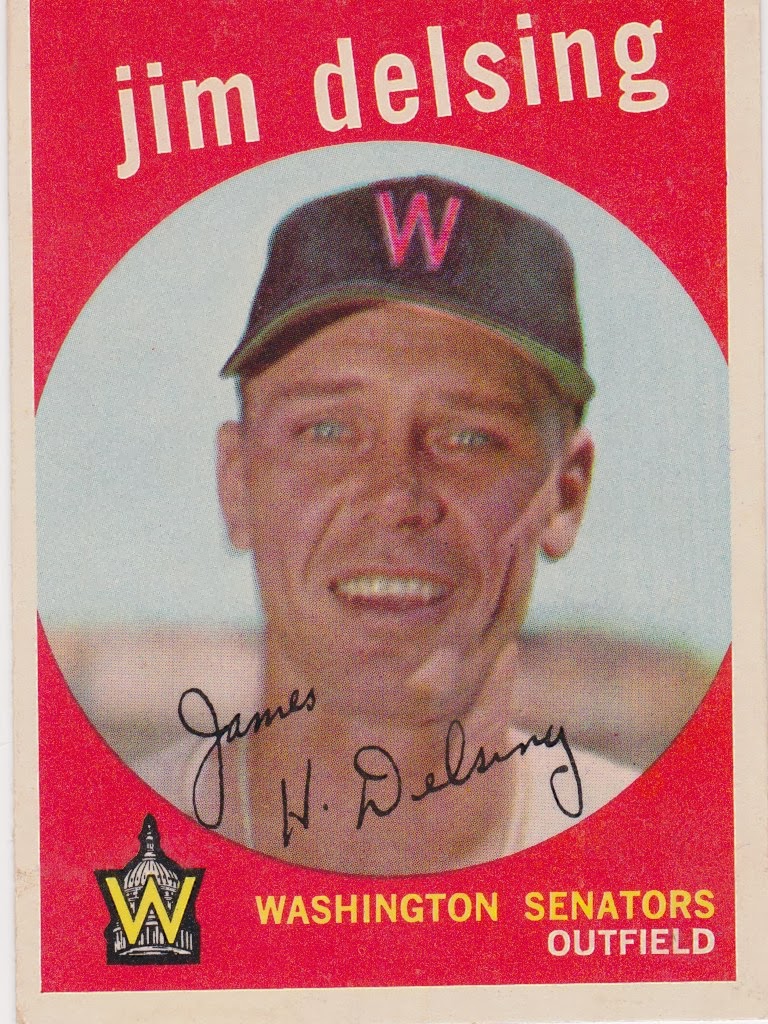 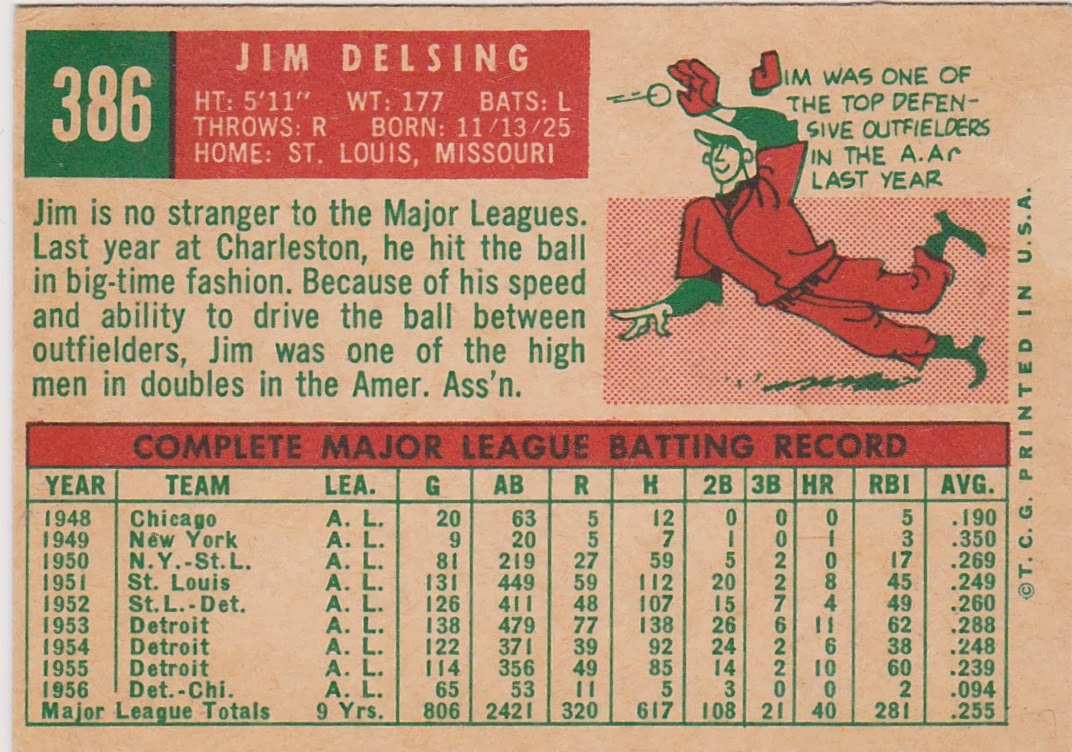 When this card was issued in 1959 outfielder Jim Delsing had played 806 of his 822 major league games, he hadn't been in the majors for two years, he was still a year away from returning to the bigs (briefly) and he had never taken the field in a Washington cap (and never would).

Also in his rearview was a unique moment that arose in August of 1951 when, as a member of the St. Louis Browns, he was called upon to pinch-run for Eddie Gaedel the 'little person' that owner Bill Veeck had his club use as a pinch-hitter. Delsing describes the whoe situation in his SABR bio thusly:


"Mr. Veeck owned St. Louis back in 1951, and he was always doing some promoting. This happened at a Sunday double-header on August 19, and between games they brought out a great big, huge cake. Out of the cake popped Eddie Gaedel, wearing a St. Louis Browns uniform, with 1/8 on the back. He gets out of the cake and walks over to the dugout. We knew nothing about it. We took a look at the lineup. I had a couple of hits in the first game, so I thought I would sure be playing."

"I went up to Zack Taylor, who was manager, and he said, Cool it. You'll be all right.' Taylor had Frank Saucier leading off. When it came time for Saucier to bat, Taylor called him back, and told Gaedel to bat for Saucier. We all thought it was a joke, because Mr. Veeck used to do all kinds of promotions. Gaedel walked up to the plate, and the umpire said, You can't bat.' But Mr. Veeck had this all worked out. Gaedel reached in his pocket and pulled out a major league contract. So they had to let him hit. Bob Cain was the Tiger pitcher, and Bob Swift was the catcher. Gaedel had a strike zone that was about an inch and a half! He walked on four pitches, and Zack Taylor said to me, Now go run for Gaedel.' Then I knew what he was talking about, why I wasn't playing the second game."


That's Gaedel in the center of this picture and Delsing is #18 leaning against the pole to the left. 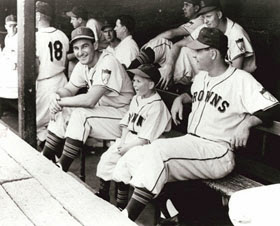 Delsing had begun his pro career in 1942 with a year of independent ball in his native Wisconsin. He was signed by the Cubs and played a minor league season in their chain before serving Uncle Sam for two years. Returning from the service Delsing found his contract had been obtained by the White Sox and he played for nearly three full seasons in the upper reaches of that team's system. He hit well enough to earn looks with the Sox at the beginning and end of the 1948 season.

He was traded to the Yankees prior to 1949 and was called up for a September look during which he hit .350 and impressed his teammates enough that they voted him a small World Series share despite his not being active for it.

He hit well to start the 1950 season for the Yanks but was traded to the Browns in June as part of a seven player deal. He was a regular in the Browns outfield putting up pedestrian numbers and was traded again, this time to the Tigers in August of 1952.

Three plus seasons as an everyday player for the Tigers was highlighted by his best season, 1953, when he hit .288 with 11 homers and 61 RBI. Subsequent seasons brought diminishing numbers and in May of '56 he was again traded, this time back to the White Sox. Over the next three years Delsing moved around the minors via a dizzying string of trades and purchases that saw him being the property of the Tigers (again), the minor league Houston franchise, the Senators (for a few months of the off-season between the 1958 and 1959 seasons) and finally the Kansas City Athletics where in 1960 he re-emerged in the majors for the last five weeks of the season. that was his last in uniform.

After baseball Delsing worked for the archdiocese of St. Louis for thirty years. He has a son who is a pro golfer and a grandson who played Major League Soccer.

For more of Jim Delsing and his interesting career (and he has some cool stories to tell) see his SABR bio or this interview done a few years back with the Missouri History Museum's magazine.

As noted Delsing never suited up for the Senators in a regular season game and his shot features a drawn "W" logo on his cap. I get the vague impression the this pic shows the left-centerfield area of Yankee Stadium in the background.
Posted by Commishbob at 5:30 AM