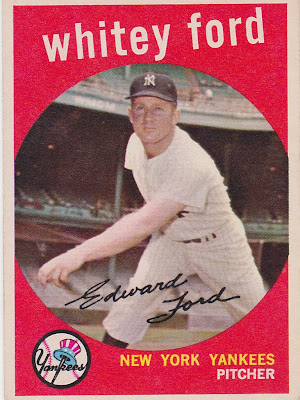 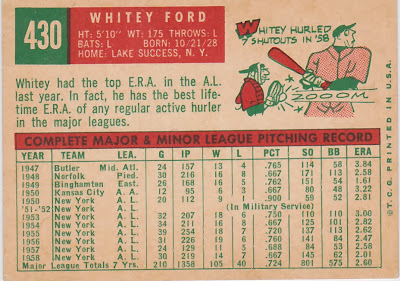 Whitey Ford didn't pitch the first game of every Sunday doubleheader at Yankee Stadium that my father and I attended, it only seems that way as I look back. No doubt I saw the great lefty pitch more than any other starter in the years I've been going to games. The Astros' Don Wilson would likely be second.

Anyway, Ford was a favorite of my father's. Probably second only to Allie Reynolds as far as Yankee pitchers go. He signed with the Yanks in 1947. He was a local kid having grown up in the Astoria section of Queens and attending Aviation Tech High School. Three and a half seasons of very impressive pitching in the minors earned him a shot with the Yanks in July of 1950.

He was hit hard in his first appearance but when put into the rotation his numbers steadily improved and he won his first nine decisions. He finished that first season with a 9-1 mark and pitched the fourth and final game of the '50 World Series. He beat the Phils 5-2 with both Phillies' runs being unearned. He went 8 2/3 before giving way to Allie Reynolds for the final out. Coincidentally that out was the strike out of Stan Lopata mentioned in Lopata's entry day before yesterday. He was second in the AL Rookie of the Year voting (to Walt Dropo) despite pitching only half a season.

Ford, like so many players in that era, was called to military service and spent two years in the Army. When he rejoined the Yanks in 1953 he picked up where he left off and reeled off a career very worthy of his 1974 Hall of Fame induction. The highlights include:

His bio on the Hall of Fame site reads as follows:


Edward 'Whitey' Ford was the big-game pitcher on the great Yankees teams of the 1950s and early '60s, earning him the moniker The Chairman of the Board. The wily southpaw's lifetime record of 236-106 gives him the best winning percentage (.690) of any 20th-century pitcher. He paced the American League in victories three times and in ERA and shutouts twice. The 1961 Cy Young Award winner still holds many World Series records, including 10 wins and 94 strikeouts, once pitching 33 consecutive scoreless innings in the Fall Classic.

Not much I can add to all that other than to say that I knew (and if I didn't my Dad reminded me) that watching Ford work was watching a master craftsman.


I don't remember how much I spent on this card but I do know it was a bargain. It's about as nice as any of the non-graded cards I picked up for this set. It has just the slightest corner wear and the colors look as good as the day it came out of the pack. Plus, it's Whitey Ford at Yankee Stadium. I put a Yankee pin on my Dad's lapel just before they buried him. I wish now I had had a copy of this card to slip into his suit.

He sure liked the 'follow-through' pose didn't he? 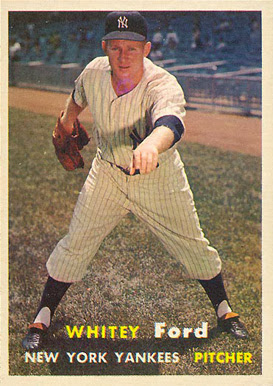 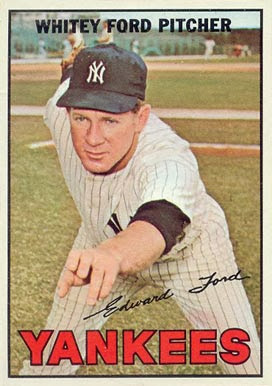 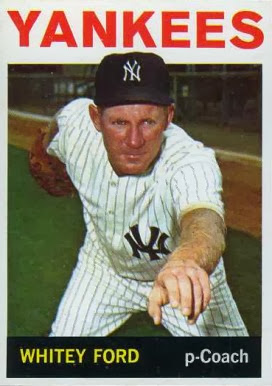 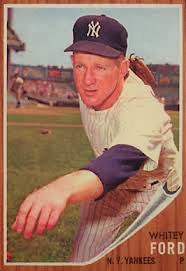 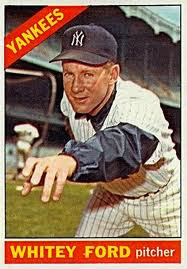 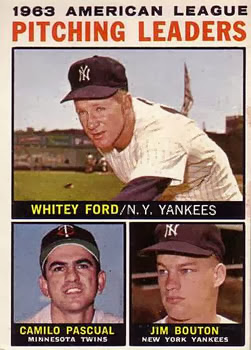 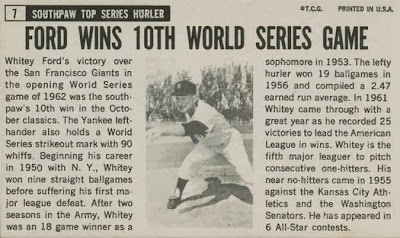 Random cool pics from around the 'net. 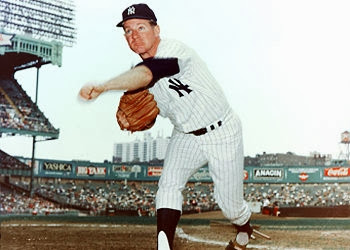 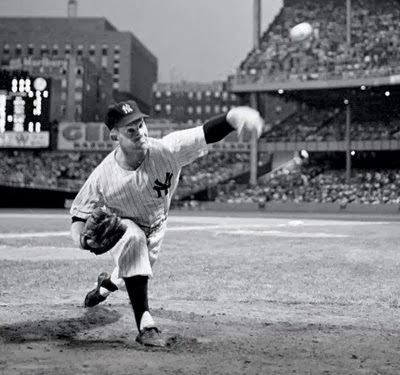 Ford on the cover of Sports Illustrated in September, 1956 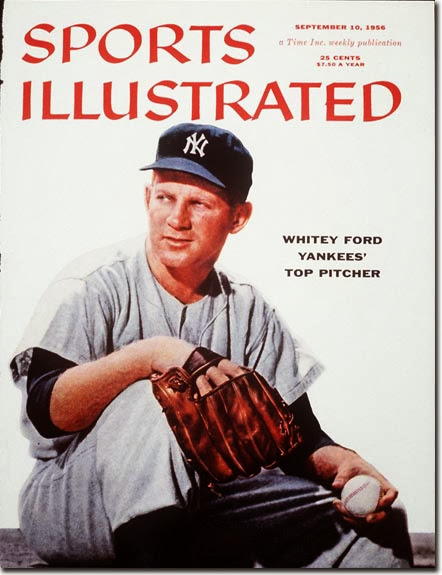