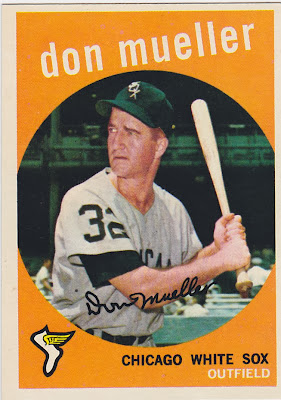 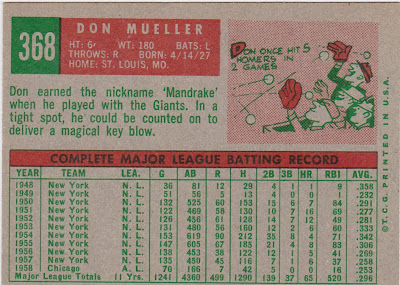 Don Mueller is pictured on this card as a member of the White Sox but he spent the bulk of his very successful career with the New York Giants. In eight full and two partial seasons with the Giants Mueller earned a reputation for timely hitting and the ability to put the ball into play.  He was given the nickname 'Mandrake the Magician' for his batting prowess. He also was know for almost never drawing a walk. In fact he struck out only 137 times and drew 156 walks in over 4400 plate appearances with New York.

Mueller signed with the Giants in 1944 and played part-time for their minor league club in Jersey City, New Jersey while mainly doing his duty as a member of the U.S. Merchant Marines. In 1948 and '49 he was a full time ballplayer and hit well enough to get extended looks by the Giants in both of those seasons.

He took over an outfield post with the Giants in 1950 and played for eight seasons compiling a .298 average for them. He went 7 for 18 in the 1954 World Series against the Indians as he helped his club win the title. That was the year he led the league with 212 hits and made the first of his two straight NL All Star squads.

Mueller played a part in the third and deciding 1951 playoff game against the Dodgers. The Hardball Times recaps the details. Dodger fans should look away at this point:

Oct. 3, 1951: It might be the most famous game in baseball history and Mueller helps kick off its most famous inning. The Giants and Dodgers split the first two games of the playoff, and in this winner-take-all contest, Brooklyn takes a 4-1 lead into the bottom of the ninth inning. After Alvin Dark leads off with an infield single, Mueller comes to the plate. So far Mueller is 1-for-12 in the series, but he laces a single out to bring the tying run to the plate.
When Lockman doubles a few minutes later, Mueller breaks his ankle sliding into third. Thus pinch runner Clint Hartung scores a little bit later when Bobby Thomson homers to win the pennant for the Giants. Mueller will not, obviously, play in the World Series, which the Giants lose in six games to the Yankees.

Mueller's numbers declined over the course of his final seasons with the Giants and he was sold to the White Sox prior to 1958 and therefore missed playing for the Giants in San Francisco. He played part time in 1958 but was ailing and got just four at-bats in '59 before he was released by Chicago in May.

Mueller, the son of Pirates outfielder Walter Mueller, raised cattle on his family farm, did some scouting for the Giants and worked in insurance after his playing days. His son Mark played minor league ball.
Posted by Commishbob at 6:30 AM