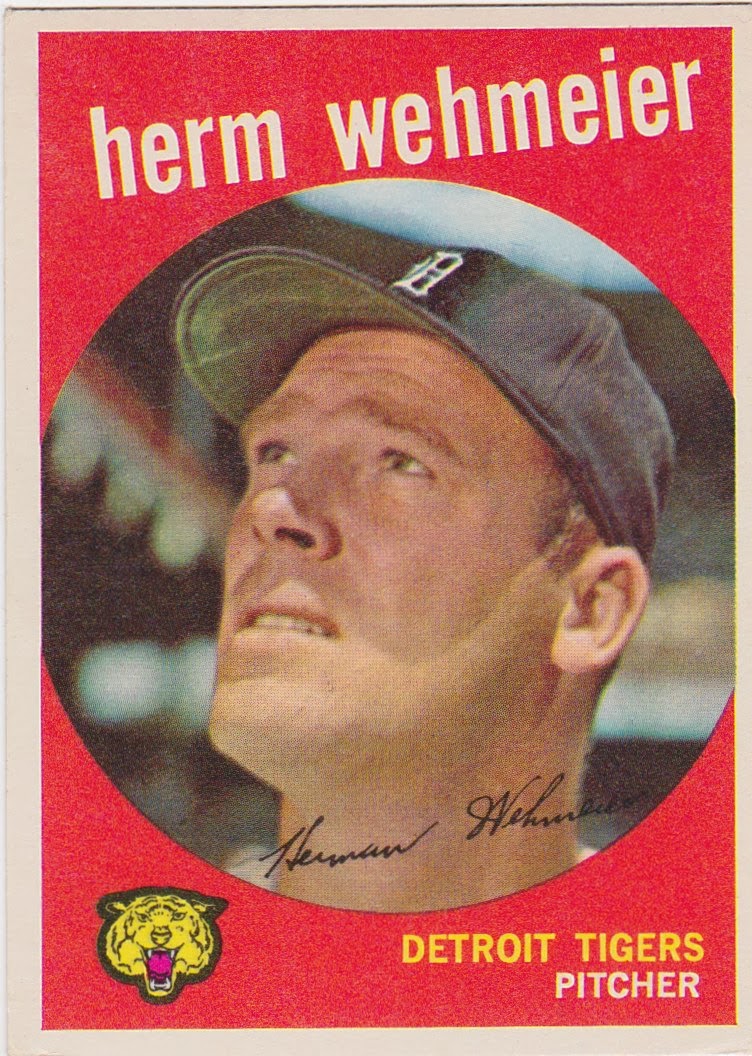 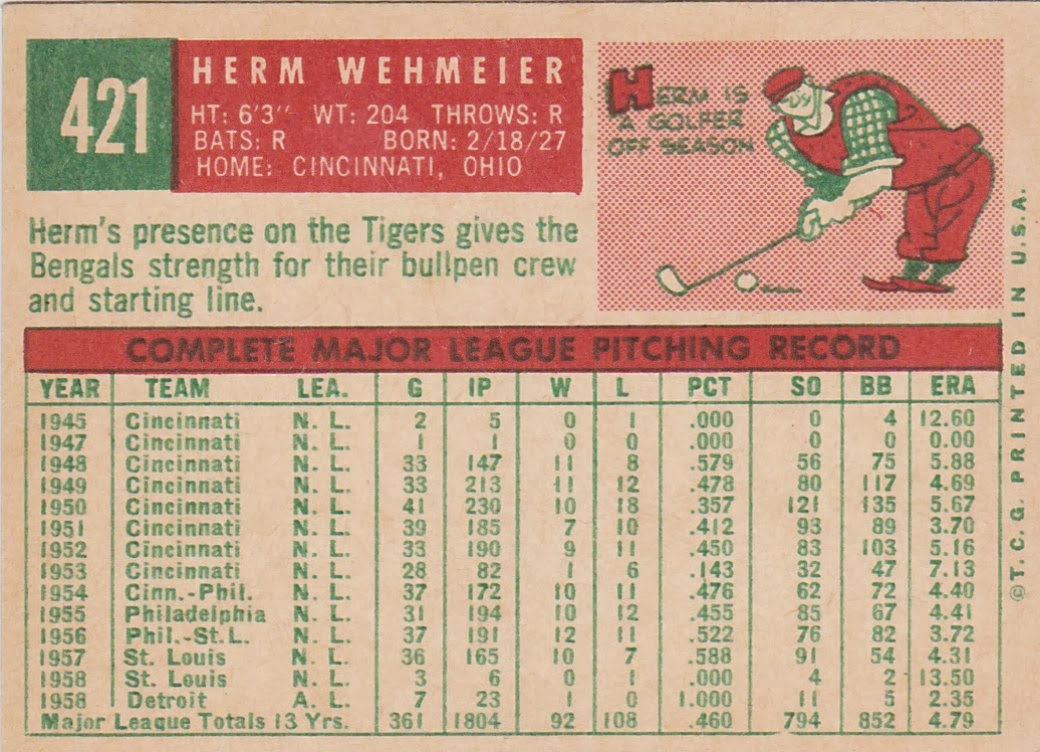 Herm Wehmeier was signed by his hometown Cincinnati Reds as an 18-year-old high school phenom in 1945. He pitched well enough at the AA level to get a call-up and two game big league look at the end of the season. He was shelled in his debut start and then spent the next two seasons posting wins in the Reds' system.

Thus he was a easy scapegoat for the troubles of the struggling team. This chapter from a book by Flip Bondy which I found on Google Books is a fun read. And it is worth the click just for the picture of Herm and Mrs. Herm. Wehmeier lost his starting spot in 1953 and after a terrible start to the 1954 season he was sold to the Phillies in June. He rebounded in Phily and won ten games with outstanding numbers over the second half of his first season there.

Wehmeier's effectiveness fell off some in '55 and in May of '56 he was traded to the Cardinals along with Murray Dickson in a deal that saw the Phils acquire Stu Miller and Harvey Haddix. The irony of that trade is that it came just two days after the Cards had beaten Wehmeier for the 14th consecutive time in his career! He had never beaten them and understandably some must have questioned the trade. He pitched very well for the Cards after a few adjustments in his mechanics and he won 12 games for them the rest of the way.

The big righthander backed that up with a ten win season in '57 but in 1958, in what was a regular pattern now, his poor start led to a move. He was sold to the Tigers in May. He hurt his arm in July and never pitched again. So his career was over by the time this card was issued.

This very entertaining blog post tells the story of his struggles with the Reds, the trade to the Cards, his post-career life and unusual death (a heart attack while testifying at an embezzlement trial). Well worth the quick read.

If you think this card looks familiar it may be because it's almost a twin to the #417 Virgil Trucks card shown below and blogged here (has it really been two and a half years?). They are even just a few numbers away from each other on the checklist are in the same page in my binder. The difference is that 'Fire' Trucks was photographed at Yankee Stadium. The Wehmeier picture however appears to be a Polo Grounds shot. He wasn't an American Leaguer outside of a few months in 1958 and that is not Yankee Stadium.

Obviously Wehmeier's cap was altered (as was Trucks'). I'd bet that the same photographer took both shots at different New York locales. 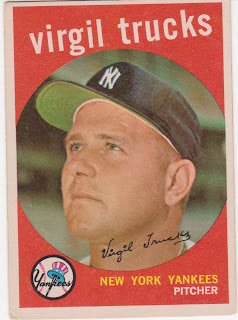 Here they are together in the binder. 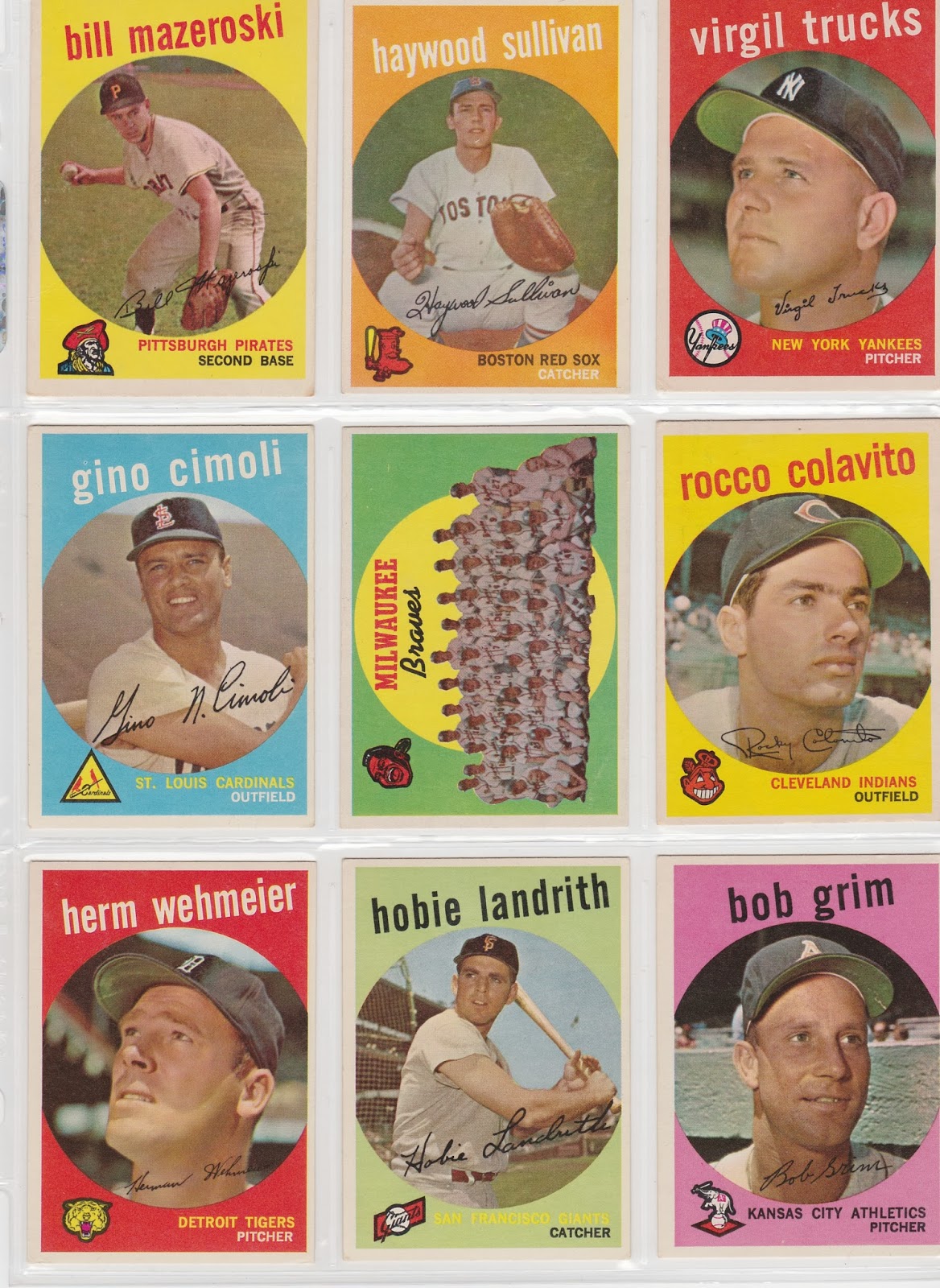