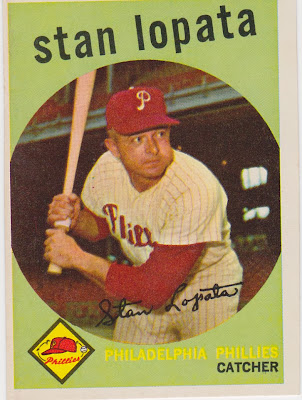 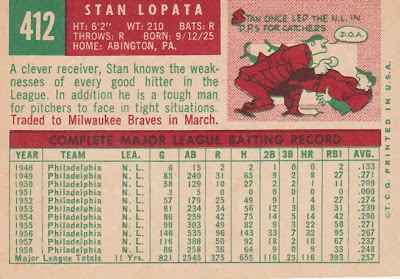 That crouch that Stan Lopata is in on this card's picture isn't just a random pose. Lopata used that stance to become a better hitter after some advice from legendary hitter Rogers Hornsby. The story as relayed to us in Lopata's obituary:

When a baseball legend like Rogers Hornsby gave a hitter advice, he'd be wise to take it.
Stan Lopata, something of a legend himself as a Phillies catcher in the '50s, was having problems at the plate in 1954 when he and outfielder Johnny Wyrostek ran into Hornsby during a road trip.
Referring to Lopata, Wyrostek asked Hornsby, "What do you think about this kid?"
The Hall of Fame infielder (.358 career batting average, 2,930 hits), said that he had seen Lopata on TV and that he missed the ball too many times.
"He said you should get a piece of the ball every time you swing the bat - not necessarily a base hit, but get a piece of it," Lopata said.
Stan took the advice to heart and worked on his stance, getting lower and lower, until he developed his famous crouch, and he concentrated on getting a piece of the ball.
As a result, Stan Lopata became one of the best power-hitting catchers in the National League in the mid-'50s.

And so it was that Lopata was able to emerge from behind Andy Semminick and Smokey Burgess to become the Phil's #1 catcher during the 1955 season. His time as a Phillie stretched from 1948 through 1958 but he had just a three year run as a starter. But he made the most of it. He made the NL All Star squads in '55 and '56. That '56 season was clearly his best as he had 32 homers and 95 RBI. Injuries marred his '57 season and he was back to having a reserve role in 1958.

Lopata, a native of the Detroit area, had originally signed with the Phils in 1946. That was following a military stint during World War II that saw him receive a Bronze Star and Purple Heart earned while serving in Marseilles, France. Once back home he played three seasons in the minors, got a short look in 1948 and then getting some significant time as a reserve in 1949 and 1950. That later edition of the Phils was the 'Whiz Kids' club that took the NL pennant. Lopata got one at bat in the Series against the Yanks. With two out in the ninth he struck out while pinch hitting for Robin Roberts in Game Four and thus ended the Series as the Yanks swept the Phils.

Lopata was in the minors for much of the next season but in '52 he was up to stay. The card-back notes that he was traded to the Braves in March of 1959. He played sparingly for the Braves for two seasons while mixing in some time back in the minors and retired after the 1960 season.

After his playing days Lopata worked for IBM in the Detroit area and then in the concrete business in Philadelphia. He died this past summer and his death reduced the number of living members of that '50 Whiz Kid club to four. Lopata's SABR bio is chock full of stories from his career. Interesting to note that he was the first catcher to wear glasses. The stadium lights bothered him with their glare so he adopted tinted glasses.

That's a Connie Mack Stadium shot on this card. Love the seafoam green frame with the red of the stadium and Lopata's uniform. This is one of my favorite cards in the set. And here are a couple of pix I found on the 'net that show his exaggerated crouch and his tinted glasses (which can be seen on his '57 Topps).. 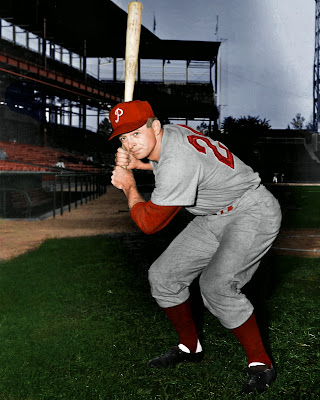 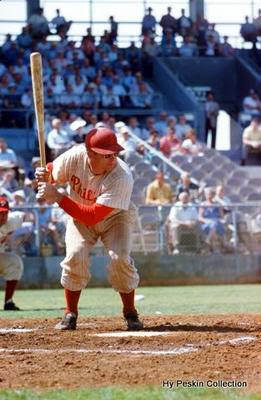 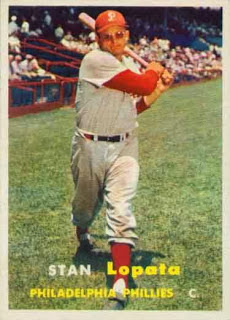 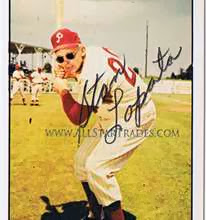