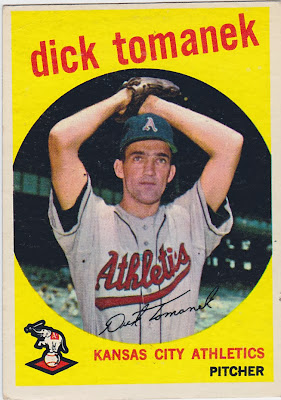 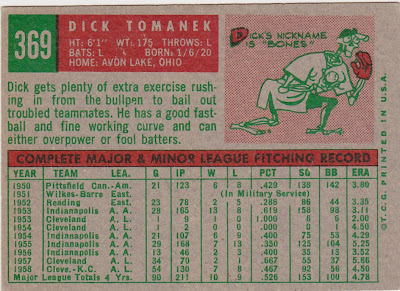 He was 6'1" and 175 so Dick Tomanek was called 'Bones'. Topps really had a great cartoon for the cardback: 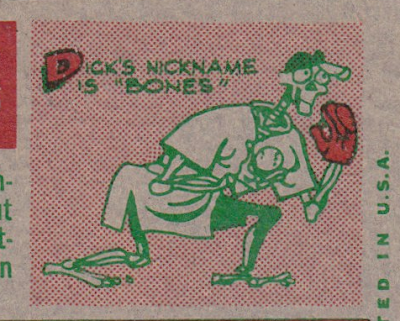 Tomanek was a native of Avon Lake, Ohio and was signed by the Indians in 1950. Cleveland was just down the shoreline and Tomanek tells this story on Baseball Reference:


"My dad told a group of his friends in a bar that if I made it up to the Indians he would walk the twenty miles from our home in Avon Lake to Municipal Stadium to see me pitch, and he did it."

That debut came late in the 1953 season after Tomanek had spent three seasons in the Indians' system and one in the employ of Uncle Sam. It was worth the wait for both Tomanek and his father as the lefty put together a six hit complete game win over Detroit on September 25.

Tomanek made the big club in 1954. He made his first appearance on April 17th when he was called upon in the first inning following a shelling of Indians starter Art Houtteman by Chicago. Tomanek was rushed into the game and in the second inning he had to be removed with a sore arm. This page from a book on Google gives the details. Tomanek didn't pitch again that season and spent the next two in the minors.

Back with the Indians in '57 Tomanek had mixed results through the summer of '58 when he was traded to the Athletics as part of the deal that sent Roger Maris to Kansas City. He was more effective that year with the A's than he had been with the Indians but 1959 was another story. He pitched only 21 innings and had a long mid-season idle stretch (injured?) and was gone from baseball after spending a rocky year in the minors in 1960.

Tomanek went to work for B. F. Goodrich Chemical and stayed with them until he retired in 1990. He reportedly still resides in Avon Lake.

I found a Cleveland-centric card website maintained by Tomanek's nephew although it's been inactive for quite awhile. He does feature his uncle's cards on one of the pages.

Yes, that's Yankee Stadium.
Posted by Commishbob at 6:00 AM