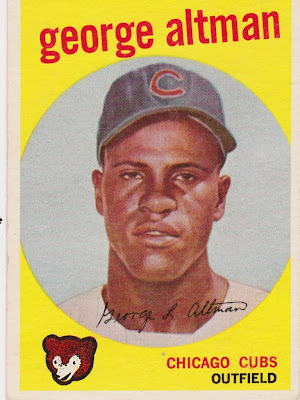 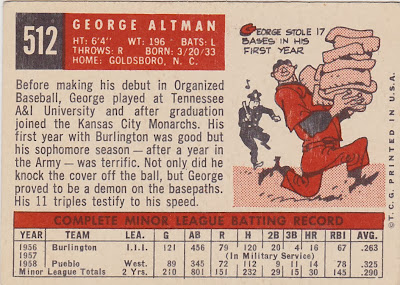 George Altman's card is the first in a run of high number cards that will be posted over the next couple of weeks. The red, black and white motif on the back is a giveaway that it's a '59 high number.

Not many of the cards that have been posted here are so devoid of stats and have such long write-ups as this one. Altman's pro experience was limited in 1959 but by the time he was through with baseball Altman had enjoyed an interesting and varied career, to say the least.

1959 was the rookie season of Altman's 'first' career. He had already played at Tennessee A & I* (which was renamed Tennessee State University in the late 60s) and for the the Kansas City Monarchs of the Negro Leagues after college. Signed by the Cubs in '56 Altman played for two seasons in the minors flashing some power and speed. He sandwiched those two seasons around a year in the Army during which he played service baseball.

Altman had respectable if not eye-opening numbers in his first two major league years playing the outfield and some firstbase and then he broke through in 1961. That year he made the NL All Star squad, led the league with 12 triples and had career highs with 27 homers and 94 RBI to go along with a .303 average. His average jumped to .318 in 1962 and he made his second All Star team but the rest of his numbers failed to match the previous season's and the Cubs packaged him that October in a trade to St. Louis.

His one season with the Cardinals wasn't more than just ordinary and he was traded again, this time to the Mets. He spent the '64 season in New York and his numbers diminished still. Finally he found himself back with the Cubs for 1965 and he played there for just a bit over two seasons as a part-time outfielder and was in the minors for most of '67. In his nine season MLB career he had 101 homers and hit for a .269 average.

That marked the end of his stateside ball but in 1968 he accepted an offer from the Tokyo Orions and for eight seasons he was a popular power-hitting outfielder in Japan. Below is a You Tube video which is actually a recorded phone interview with Altman done by two Chicago radio sports show hosts. In it they mention that Altman began his career with a franchise owned by a gum company (Cubs/Wrigley) and nearly ended it with another one (Lotte Orions/Lotte Holdings). Actually Altman played one more year in Japan with the Hanshin Tigers in 1969 and then called it a career.

All in all Altman played for a high school and college team, in the Negro Leagues, on a U.S. Army team, in the minors, the majors, in winter ball in Cuba and in Japan. Quite the resume.

There is a nice blog bio of Altman to be found here. The Negro League e-Museum has an Altman bio page. Last, but certainly not least Altman wrote an autobiography that was published last fall. It's available here on Amazon.

*- Altman had actually attended TSU on a basketball scholarship and helped lead the Tigers to three national Black Collegiate championships. More details (and the same video shown below) are available on this Altman page on the Tennessee State Athletic site.