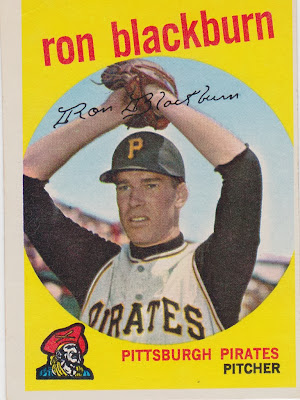 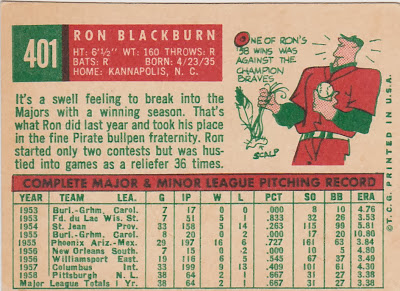 Ron Blackburn was a pitcher for the Pirates in the late Fifties therefore he wore a batting helmet while pitching. Supposedly it was Branch Rickey's idea that players were to wear helmets in the field. May have been a good idea but it still looks odd to me no matter how often I see it.

Blackburn signed with the Pirates in 1953 and the North Carolina native worked as a starter for five seasons in the minors before he made the Pittsburgh roster as a reliever in 1958. He picked up a win in relief in his big league debut on Opening Day against the defending champion Braves. Here is how Blackburn recalled it as quoted by Baseball Reference:


"Hank Aaron was the first hitter I faced. It was Opening Day, 1958, at Milwaukee County Stadium. I remember it right down to the last patron: 44,344 fans in the stands. I came on in the bottom of the ninth inning, the score was tied and Hank tapped a grounder between short and third and Dick Groat went over and fielded it straight in front of me and was unable to make a throw. So he beat it out for a single. I faced nine more hitters and no one else got on base and I got the victory that day, 3-2."

Wikipedia picked up that ball and ran with this:


His major league debut was on Opening Day 1958 against the Milwaukee Braves. The first batter he pitched against in his major league career was Hank Aaron. Aaron hit a single off of Blackburn, but Blackburn managed to keep the next nine batters off base for his first Major League win.

Cool story but here is how it actually went, at least according to Retrosheet's boxscore:


So it appears Blackburn came on in the 11th, not the ninth and faced Casey Wise, not the Hammer. Aaron did single, but it was in the 13th, Blackburn's third inning of work. He pitched to one more batter and obviously didn't retire nine straight after Aaron. He got the win with Raydon getting the save. Final was 4-3, not 3-2.

I frequently tell stories of my days as a kid and games I attended. I'm sure sometimes I've mixed up dates and facts so this is not to demean Blackburn in any way. I guess my point is that memories can be imprecise and BR's quoting of Blackburn without a reference is proof that you can't always believe what you read, even if it's on the internet (sarcasm intended). And of course if you rely on Wikipedia for facts you pretty much get what you deserve.

Beyond all that Blackburn did in fact go on to have a successful rookie season. He appeared in 38 games and turned in an ERA of 3.39 in almost 64 innings with three saves to go with a 2-1 record. He even had two hits in seven at bats and both were doubles.

Blackburn was back in Pittsburgh in 1959 but as the season went along his earned runs allowed kept mounting and he was farmed out in July. He pitched in the minors, mostly in the Pirates chain through 1964 before he hung up his spikes.

After retiring Blackburn earned a degree and became a teacher and baseball coach at North Carolina's Catawba College and then the recreation director at the Western Correction Center in Morganton, North Carolina.

This is one fine card condition-wise. Bright and clean. It's off center but very close to mint otherwise. Many other Pirate players are pictured in this set in Seals Stadium in San Francisco. This might be where this shot was taken although it's hard to tell without a clear view of the signature red railings. There is a chance that it's in L.A.'s Coliseum.

BTW.... Blackburn had three Topps cards in all. Each of them pictured him wearing that darn batting helmet. 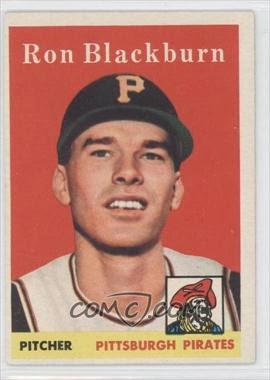 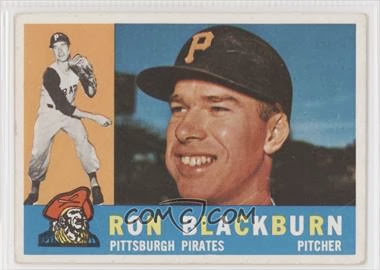