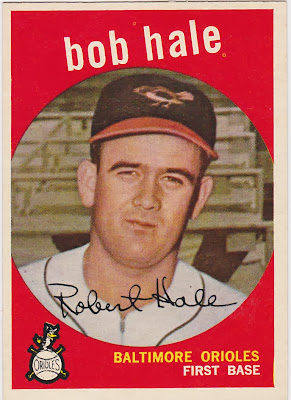 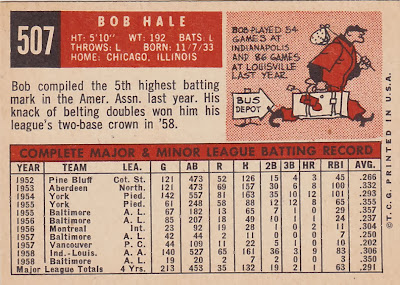 In each of Bob Hale's first two years in the minors after signing with the Browns in 1952 he had exactly 473 at bats while playing in 121 games. Identical numbers, both seasons. How did he pull that off?
Anyway his batting average did climb and he continued to hit well for a couple of additional seasons until he got a shot with the Orioles in July of 1955.

He took advantage of it, too. He hit .357 from his July 4th debut until the end of the year. But those numbers were hard to match and Hale split time in each of the next four seasons between the Orioles and the minors. Most of his big league time was as a pinch hitter but he did play first base, too. Oddly he played in the Dodgers', White Sox', and Tigers' organizations at various times during that stretch without being involved in any transactions I can find. Must have been some sort of 'loan-a-bat' program.

He was waived by the Orioles and claimed by Cleveland for 1960 and for a year and a half he was their #1 hitter off the bench. In July of 1961 the Tribe sold Hale to the Yankees and he had a front row seat for the Maris/Mantle home run chase as well as getting to pour pennant winning clubhouse champagne. He did not get to play in that season's World Series.

In a Jerome Holtzman book I found on Amazon Hale discusses his brief Yankee tenure. He comments on the depth of that '61 club by stating that while he was the #1 pinch hitter at each of his previous stops he was #4 on the Yankees. He also mentions that he received a 2/3 Series share despite only having pinch hit seven times for them (actually he had 10 pinch at bats plus one full game, but who's counting?)

Hale goes on to comment on the Yankees' decision to farm him out for 1962 proclaiming that he'd hit .300 at Richmond.and be recalled. That never happened. Hale hit .282 in close to 100 games but never did make it back to the big leagues. So it turned out that his last major league game was the game that Roger Maris hit his 61st homer.

There is not much about Bob Hale that I can find on Google. I did learn from this blog page that from August of 1960 thru August of 1961 he went 60 games with an at-bat without scoring a run. As of 2008 that stood as the fourth longest streak since 1956. Take that for what it's worth.

Bob Hale passed away in September of 2012.