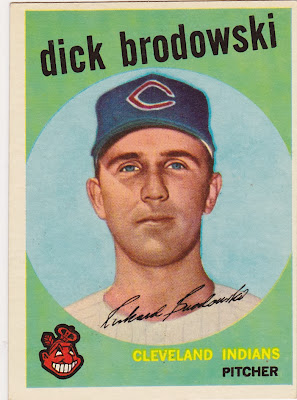 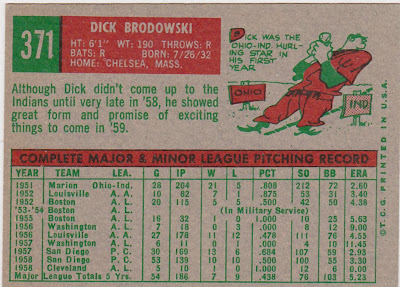 Only 30 cards remain in the 1959 Topps set after this one of Dick Bordowski is posted. There is one superstar's card, a couple of All Star cards and a bunch of the high number series cards remaining. If I can keep to my regular every-other-day posting habits I should complete the cards before Opening Day, which would be 55 years after the set was first issued.

New Jersey born right-hander Dick Bordowski signed with the Red Sox straight out of high school in 1951 and made an immediate splash in their minor league system with a 21-5 season at the 'D' level. He pitched well the next season at AAA and was rewarded with a June call-up to the Sox. He had one good, one OK and one bad outing right off the bat but when called upon to start late in the month he rewarded the Sox with a pair of complete game wins. He had a roller coaster season after that and ended up with a 5-5 record and an ERA of 4.40 with 12 starts over 20 appearances.

He was in the service for the next two years and interestingly he didn't pitch much even though he was a member of the Army's baseball team. Instead he played second base. He had originally been signed as a duel position player (inf/p) and over his career he was a good hitter. Bordowski was back with the Sox for the '55 season and was generally ineffective. He was traded to Washington in 1956 and the Indians in 1958. Over those four years after his Boston days he was up and down between the majors and minors every season.

After one poor outing in 1960 he was out of the game as a player. After baseball Bordowski worked as a salesman, an insurance agent and in security. The Baseball Historian blog has a neat interview with him. He's sharp, funny and has some interesting Ted Williams stories. The interview is here and it's worth a look.
Posted by Commishbob at 6:00 AM