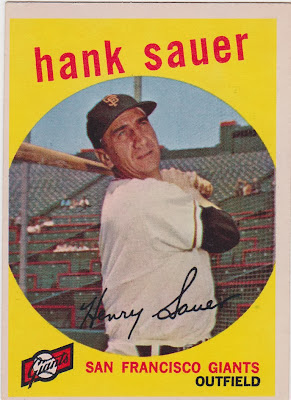 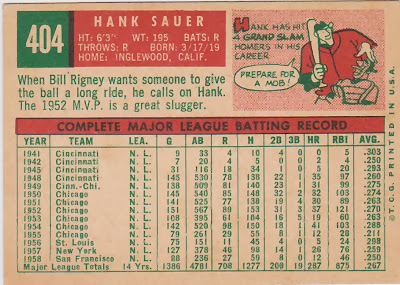 At the age of 42 in 1959 Hank Sauer was the third oldest player to have a card in the set. Only Enos Slaughter and Murray Dickson had a year on the guy whose nickname was 'Honker'. While he's shown with his last team, the Giants, Sauer's glory days came with the Chicago Cubs with whom he played from 1949 through 1956.

Sauer's pro baseball career began way back in 1937 when he signed with the Yankees after the western Pennsylvania native had spent a couple of years working in a New Deal Civilian Conservation Corps job to help support his family. He spent three years playing in the Yankee's system and displaying a powerful bat before he was drafted away by the Reds. Over the next seven years Sauer played mostly in the minors for Cincinnati while getting three major league trials of various lengths and putting in a year of military service. His minor league exploits led to his being elected to the Minor League Baseball Hall of Fame.

He took over the left-field job for the Reds in 1948 and proceeded to blast 35 homers while hitting .260 and driving in 97 runs. But a slow start to 1949, combined with a propensity to strike out caused the Reds to trade Sauer to the Cubs in June. He made the most of the change in scenery and in less than 100 games he had 27 homers, 83 RBI and a .291 average. His hitting captured the hearts of Cub fans and they would shower him with pouches of his favorite chewing tobacco during games.

His hitting had improved when he switched to a heavy 40 ounce bat and it never let up during a five season stretch on Chicago's North Side. Dubbed the 'Mayor of Wrigley Field' Sauer hit over thirty homers in each of the next five seasons except one. In 1952 he led the NL in home runs with 37 and RBI with 121. He won the NL MVP Award for that production.

His numbers plummeted in 1955 and he had lost his starting job when the Cubs traded him to the Cards. He played well in a reserve role in St. Louis but was released due to what Sauer claims was his being a bad influence on Stan Musial. Sauer discusses this in his SABR bio:

Sauer, playing as a reserve in 1956, batted 151 times, but he averaged .298 with five home runs and 24 RBIs, despite being hit in the face with a bat during one of the team’s practice sessions. Also, he and his roommate stayed out until after midnight two or three nights a week, which, Hank recollected, Musial enjoyed.
The Cardinals’ management, however, did not favor late-night carousing. Sauer observed, “In September of ‘56, the manager [Fred Hutchinson] came up and said, ‘Hank, we’ve got to let you go.’ I said, ‘Let me go! I’m having a pretty damn good year. Why are you letting me go?’
“He said, ‘Yeah, you’re having a good year, but your roommate is having a lousy year. He’s only hitting .315.’ I said, ‘What the hell’s the matter with .315?’ He said, ‘Musial is not a .315 hitter. He’s a .330 hitter. You’re on your way!’ So I was the one who had to go.”

Sauer revived his career with the Giants in 1957 and earned Comeback of the Year honors but in '58 he was back to a reserve role and in '59 he played sparingly before becoming a coach at mid-season. That ended his playing days. He remained with the Giants in various capacities for 35 years. He died at the age of 84 in 2001 while playing golf.

That's Seals Stadium behind Sauer with it's distinctive red railings. The 'Honker' looks every bit of his 42 years, doesn't he?

Sauer's brother Ed played the outfield for three NL teams in the 1940s. His son Hank Jr. played three years in the lower minors in the 1970s. There are several articles about his days in Chicago on the Chicago Tribune web site. And here is his obit in that paper.
Posted by Commishbob at 6:00 AM