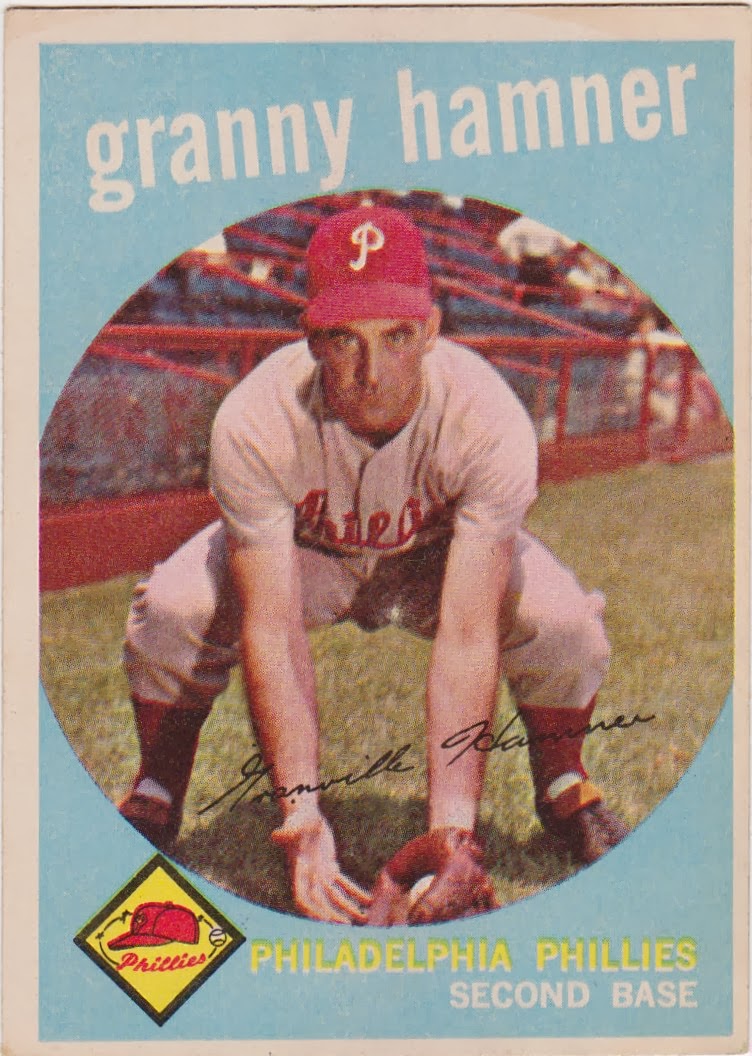 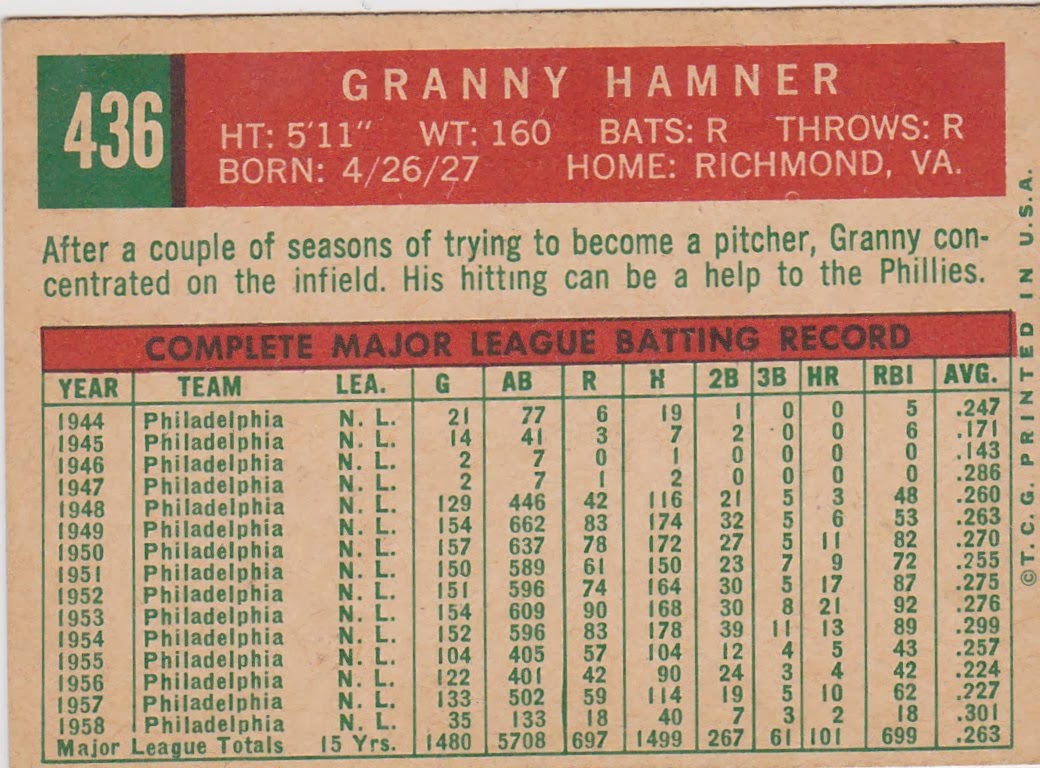 Granville 'Granny' Hamner was the captain of the 1950 'Whiz Kids' that won the NL pennant. He was in his third full season with the Phils at that point. As a 17 year old signee in 1944 he played in 21 big league games and held his own hitting almost .250. He struggled the following year and was in the minors for most of it and then spent most of 1947 in the military.

He took over as the teams' starting shortstop in 1948 and held down a middle infield spot for a decade usually hitting between .260 and .280 and showing some power. He held the Phils' record for homers by a shortstop (17 in 1952) until Jimmy Rollins broke it in 2006. He had over 100 career dingers. In that 1950 Series against the Yankees Hamner hit .429 on 6 for 14 with three extra base hits.

Hamner, who's brother Garvin was his teammate and sometimes DP partner in '45, was the first player to be elected as an All Star starter at two positions. He was there as a shortstop in 1952 and was selected as a second baseman the next two seasons. 1954 was arguably his best season as he hit .299 with 11 triples, 13 homers and 89 RBI.

In 1956 Hamner hurt his shoulder which limited his ability to swing a bat but he possessed a pretty good knuckleball and the Phils used him out of the bullpen a few times. That injury and a 1958 blown knee all but ended his career. He was traded to the Indians in May of 1959 but struggled at the plate and retired as an active player (or so he thought).

After moving into coaching and managing in the minors he was pressed into service as a pitcher a few times in the A's system and when injuries crippled the major league staff Hamner was activated by the big club and he got into three games in 1962. His last association with the game in an on-the-field capacity was as a minor league manager in 1988. He spent many years in the Phils' organization as an instructor and minor league supervisor.

He died in 1993. Some fun stuff (including Hamner memories from Richie Ashburn) can be found in this Google book excerpt.

In addition to having a brother who played major league ball Hamner's grandson, Chris Ambrosius was a standout college player at Penn.

I'm puzzled by the text blurb on the back on the card. It implies that Hamner began his pro career as a pitcher before giving it up to play the field. I can't find any evidence that was the case. Hamner made it clear in this interview that his pitching came about as the result of his injured shoulder and he certainly had no aspirations to change to a full time hurler. His minor league career in the 40s as a Phils' farmhand was strictly as an infielder.

Red railings = Seals Stadium in San Francisco. As pointed out in a comment by Bob O. on the Billy Harrell card posted the other day, these 5th Series light blue cards have white type for player names and position, yellow lettering for team designation. Besides the Harrell and Hamner the Elston Howard card falls into this category. Other light blue cards in the set use black letters for name and team, white for position.  I scanned the two recent light blue cards at the same time and something about them struck me as odd. But my copy of the Harrell card is so pale and washed out I chalked up my thoughts to that and only later looked into it further. Yesterday's comment got me to look back at all the cards in that series and I saw the Howard card.

Back in 2012 I did a few posts on the color distribution of the '59 set. I've revised one of those posts to reflect the two different coloring conventions for the light blue cards.