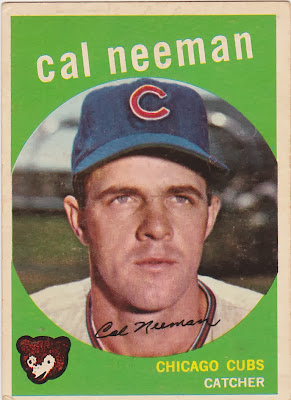 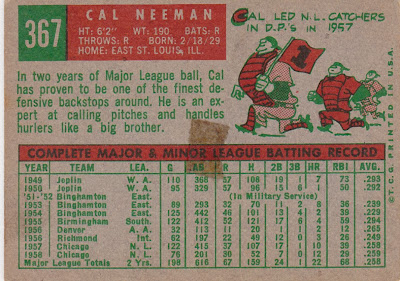 Signing as a catcher in 1949 with the New York Yankees Cal Neeman faced the unenviable task of moving up the minor league ladder with a roadblock named Yogi Berra at the top of it. He spent two seasons in the military but even eight years after first signing Neeman wasn't going to make the Yanks and displace Charlie Silvera or Elston Howard, much less Berra.

The Cubs took him in the minor league draft and he took over in 1957 as the starting catcher on Chicago's North Side. He hit 10 homers to go along with a .258 average and 39 RBI which represented a sizable improvement over the previous Hobie Landrith/Harry Chiti platoon. Ironically Neeman was backed up in 1957 by former Yankee Silvera.

Neeman's time as a starter was short however as the Cubs gave the job to Sammy Taylor in '58 and by '59 Neeman was an afterthought. Early in 1960 he was part of a trade that also sent Tony Taylor to Philadelphia and after that Neeman spent about four seasons banging around through several different organizations getting big league time here and there for the Pirates, Indians and Senators.

He was out of the game after the '63 season and went through several career changes after that including being a railroad switch-man, college student at Illinois Wesleyan University, a teacher and coach, school supply salesman and retail store manager.

He lives in Florida these days and the MLB BlogNetwork caught up with him a year or so ago and Neeman reflected on his career including getting his first big league hit (off Warren Spahn) and first big league homer (off Lew Burdette).

That is a nice big fat tape stain in the middle of the cardback. Not enough of a issue for me to upgrade this one.
Posted by Commishbob at 5:30 AM