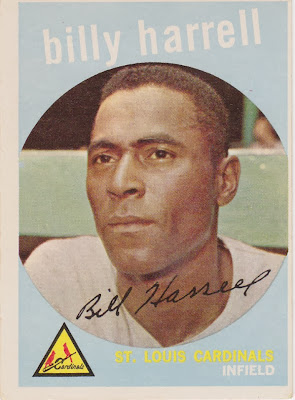 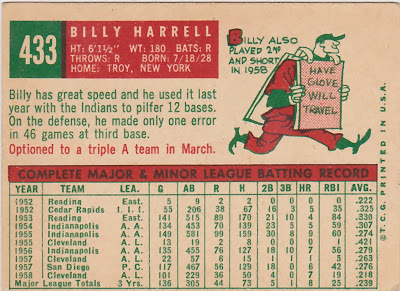 This card of Cardinals' infielder Billy Harrell seems pretty mundane with the hatless subject staring out into the middle distance from what I'm guessing is the visitors' dugout in Yankee Stadium. But some of the most mundane cards reveal some of the coolest stories.

Billy Harrell has one such story. The Norristown, Pennsylvania native played basketball for Sienna College from 1949 through 1952. He was very good at it, too. So good that he was known as 'The Flash', received UPI All American honorable mention honors and he led Sienna to the National Catholic Invitational Tournament championship in 1950. Don't sell that short. The NCIT was considered a top tournament back in those days, right up there with the NIT (then the most prestigious postseason prize) and NCAA tournaments.

The tournament was still in it's infancy then and was scheduled to he held in Baltimore until it was learned that the area hotels would not allow the black players to stay at their establishments. Sienna, who had already received their invite as the #3 seed, offered to host and Harrell and his teammates ran the table (Harrell apparently was a hellacious rebounder) and took home the trophy.

As an interesting aside, City College of New York won both the NIT and NCAA tourneys that year (the only team to ever pull that off) but had both crowns were spoiled by a point shaving scandal that erupted within a year.

Harrell finished his Sienna career as the schools season rebounding record holder, a record that was only broken in 2011. His #10 was the first uniform number ever retired by the school.

Harrell moved on to pro sports after his Sienna days and played baseball for the Birmingham Barons of the Negro Leagues and hoops for the ABL's Saratoga Harlem Yankees. He had previously rejected offers from the Minneapolis Lakers and Harlem Globetrotters. Eventually he signed with the Cleveland Indians and spent six seasons in their system. He had call-ups in 1956 and 1957 and hit pretty well. He spent the entire season with Cleveland in 1958 and played some at shortstop getting almost 250 at bats. He hit only .218 and the Indians waived him that winter and he was claimed by St. Louis.

Although shown as a Cardinal Harrell never made the team and spent two full seasons at the AAA level. His bat (he hit ..293 in 1960) attracted the Red Sox and they took him in the minor league draft and used him a bit in 1961 but after that he was never able to rise past the AAA level and remained there until he retired in 1966. The cardback has a line indicating St. Louis sending him down before the season.

Billy Harrell is (unofficially) the only player to have played in three countries over a span of two days. With Rochester in 1960 he played past midnight in a doubleheader in Havana before catching the 'red eye' to Toronto for the International League All Star Game that evening. He then rejoined his teammates for a home game stateside the next day.

At last report Harrell is retired in Albany, NY, where he had been employed with the State Youth Division in placement and counseling. An article/interview that focused on him and the plight of other former players who fell outside the old baseball pension guidelines can be found here.

Here is a small pic of Harrell playing for Sienna. 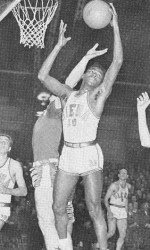 Posted by Commishbob at 6:29 AM