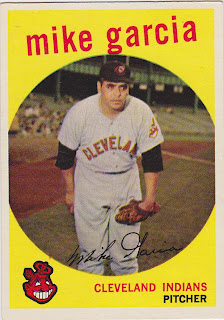 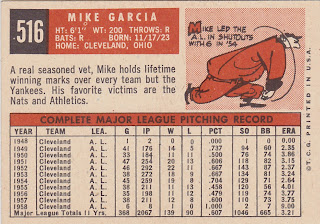 Mike Garcia was known as the 'Big Bear'. Sometimes nicknames just fit, no? Garcia was part of the Indians' pitching troika of the 50's that also included Bob Feller and Bob Lemon. Those Indians' clubs were powerful but were hard pressed to climb past the Yankee teams of that decade. They took one pennant, that being in 1954. Each of the other seasons from 1951 thru 1956 they finished second to the Yanks.

By the time this card was issued Garcia was nearing the end of a excellent career. He began with a season in the Tribe's farm system in 1942 then spent three years in the military during World War II.

Returning to civilian life Garcia moved through the minors until he made his debut in 1948 with the Indians by pitching in the last scheduled game of the regular season. Garcia got a couple of innings work late in a game lost to Detroit by Bob Feller. That loss allowed the Boston Red Sox to catch the Indians and force the first AL playoff game. The Indians won that game the following day and eventually the World Series.

The next season Garcia had a regular rotation spot and won 14. Over eight seasons as a starter for the Indians Garcia won 138 games. He added a few more as his career played out. He made three All Star squads and pitched twice in the '54 Series against the Giants.

Garcia injured his back in the spring of 1958 and saw limited action. He was released in May but later re-signed for '59 but was released for the second time following a modest showing that year. He had a couple of stints with the White Sox in 1960 but spent the majority of that year as their batting practice pitcher.

He hooked on with the Senators for part of the '61 season. His last decision was a loss in relief to the Indians late that year.

As he posed in Yankee Stadium for this shot by the Topps photographer I can imagine Mike Garcia thinking "How tough can I look for this guy?" while the dude with the camera was wondering "Jeez, could he have hiked the damn pants up any higher?"

Me? I saw that card and thought "Hmmmm.. pretty nice copy of a high number card. I'll take it."
Posted by Commishbob at 7:30 AM