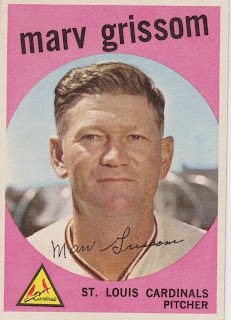 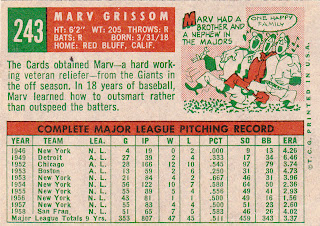 Marv Grissom looks like the state senator representing the western district of Nebraska, don't you think? Or maybe a parish priest. I can't decide.
After a couple of minor league looks and a four year stint in the service during WWII Grissom finally debuted briefly as a 28 year old rookie with the New York Giants in 1946. He disappeared back to the minors soon after that and traveled through the Tigers organization before establishing himself with the White Sox in 1952. That year he started 24 games, won 12 of them and posted a respectable 3.74 ERA. But he was traded to the Red Sox prior to 1953. They waived him and he was claimed by the Giants in July of that year.
He spent that year and the next five as a bullpen stalwart for the Giants in New York and, in 1958, San Francisco. 1954 was his best season. He won 10 games and saved 19. He was an All Star that year and won a World Series ring by helping the Giants defeat the Indians.
Grissom won Game One of that Series, entering immediately after the famous Willie Mays catch of  Vic Wertz' shot to deep center. He finished out that game allowing a hit and three walks in 2.2 innings.
Grissom was traded to the Cardinals following the 1958 season and pitched briefly for them. He had injured his back in the spring and never got healthy. He retired in June of that year.
Following his career he served several clubs as a pitching coach. Over three stints he coached the Angels hurlers for 15 seasons. Marv's brother Lee pitched for four clubs in the 30s and 40s. Their nephew Jim Davis pitched for three clubs in the 50s.
A nice interview of Marv Grissom appears on the web here and an obit here. This webpage makes the statement that Grissom was recommended to the Giants by Johnny Mize who played against him on service teams during their time in the Pacific. And Grissom has stated the same thing. Baseball Reference shows he was signed by the Giants in 1941. I don't know the significance of the fact that Grissom was a Giants farmhand before his service play. Or if it's just a coincidence. Or that it matters.
Another pink border card. I don't know what the players felt about them when they got the freebies from Topps but I like them. There is a crease in the lower right corner that my scan hides pretty well. Marv is pictured in his Giants gear here.
Posted by Commishbob at 5:36 AM