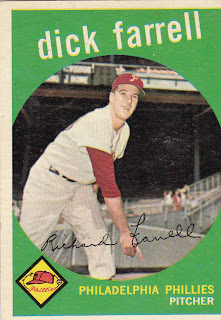 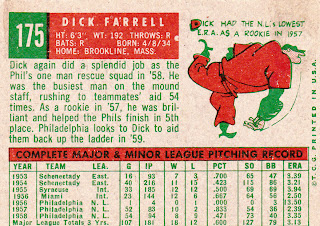 When I think of 'Turk' Farrell I think of hard drinking and fast living. That was the reputation he had whether it was earned or not. But there are plenty stories around Houston baseball circles that make me think there is a lot of truth behind the myth.
Farrell spent several seasons as a starting pitcher moving up the Phils minor league ladder before his 1956 debut and then earning a full time bullpen slot in 1957. He had four solid seasons with the Phils including an All Star selection before a shaky start in '61 prompted a trade to the Dodgers. He was drafted in the expansion draft by Houston and was converted back into a starter.
He made three All Star squads with the Colt 45s/Astros before being sold to the Phils in May of 1967 for a return engagement. The Phils turned Farrell into a reliever and he was generally effective before he pitched in the minors in 1970/71 and then he retired with a 106-111 record and 87 saves.
Ferrell moved to England and worked on offshore rigs in the North Sea before he died in a car accident in 1977 at the age of 43.
Posted by Commishbob at 9:12 AM