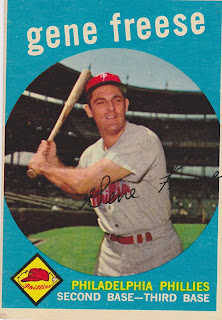 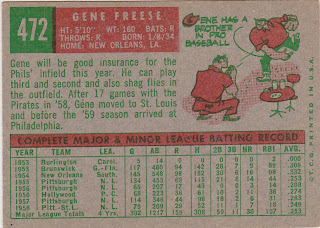 Gene Freese played for six clubs in his 11 seasons in the majors. I'm guessing he was either real popular and coveted by GMs because of his versatility and solid if unspectacular hitting. Or, he kept disappointing GMs who though he looked like a real slugging infielder. I dunno.
And for some reason I was under the impression he was related to the David Freese kid who plays for St. Louis. Nope, but he did have a brother who played big league ball briefly.
While primarily a third baseman during his career Freese also played quite a bit at second and got in games at short and the outfield as well.
He came up with the Pirates in 1959 and hit 14 homers while batting .253. He was in and out of the Pirates' plans for a few seasons before being dealt to the Cardinals in 1958. The 23 dingers he hit was his best homer season up to that point in his career but that didn't stop the Phils from dealing him to the White Sox.
That was another one year stay and it was on to the Reds for 1961. 26 homers, 77 RBIs helped the Reds make it to the Series and earned Freese a couple more seasons in Cincy but he missed most of the '62 season after breaking an ankle and then it was back on the merry-go-round and visits to Pittsburgh (again), the White Sox (again) and finally the Astros in 1966.
Then it was a couple of seasons in the minors before retiring. He managed a bit in the minors in the early 70s and even got a few cuts in for Shreveport in 1973. He managed Denny McLain that year, another guy hanging on to a dream for dear life (and a paycheck from what I understand).
After getting out of baseball for good Freese owned a nightclub in New Orleans. I bet doing that had at least a few interesting moments.
Gene Freese's brother George got a bit over 200 at bats during a few stints with a trio of big league clubs. He was primarily a minor league third baseman. He did play a season with his brother in Pittsburgh in 1955. George Freese is a member of the Oregon Sports Hall of Fame. That honor was earned as a player for the Portland Beavers in the late 50s. Here are the brothers Freese as Pirates. 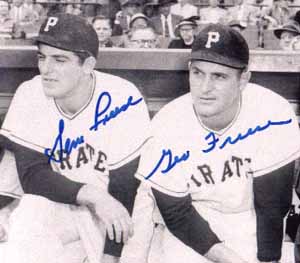 Topps went to a lot of trouble to airbrush Freese into a Phillies uniform. Didn't do a half bad job, either. I'm almost 100% sure that's the Polo Grounds. I saw a few Mets games there but I sure can't remember it well enough to recognize it in that shot. Little help?
Posted by Commishbob at 6:09 AM