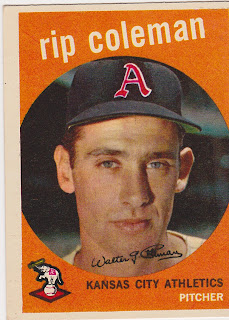 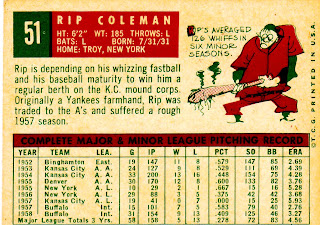 Walter Gary Coleman, better known as 'Rip' Coleman was a Yankee signee out of Syracuse and Wake Forest Universities in 1952. It took him four seasons to climb the ladder and he debuted with the Yanks in August 1955 after winning 12 games in Denver that season.
His first game was a start against the Orioles. He was pretty shaky allowing five hits, five walks and six earned runs in five plus innings. Luckily for Rip the Yanks had their hitting shoes on that day and had staked him to a big lead. Bob Grim finished the game and Rip Coleman had a win. The O's starter and loser was Ray Moore whose card was recently profiled here.
Coleman pitched in nine more games that season and got into Game Four of the '55 Series against the Dodgers. He was hit hard in his inning plus allowing five singles and a couple of runs. He was also with the Yanks during the 1956 Series but didn't appear. Likely got a ring, though.
After a 3-5 1956 season as a spot starter and reliever he was shipped to Kansas City (surprise!) for '57. He was in the minors for a portion of that year and then was knocked around and saddled with an 0-7 mark with the Athletics. Note that the back of his card calls it a "rough 1957 campaign".
After spending 1958 in the minors he went 2-10 in KC in 1959 before he was waived and picked up by the Orioles. He pitched sparing for the Orioles but kept posting some decent minor league stats before hanging up his spikes after the 1962 year.
Some of these white cardboard cards give my scanner the jumps. I've tried to adjust the brightness and contrast with Google's online tools because I'm too lazy to re-scan it. Topps airbrushed the "A" onto Rip's cap. Probably over the "NY". They probably cropped it 'tight' to eliminate the need to do much with the pinstripes which are barely visible. I replaced a centered but bruised copy with this sharper but mis-cut version.
Posted by Commishbob at 8:48 AM