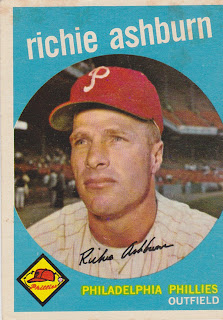 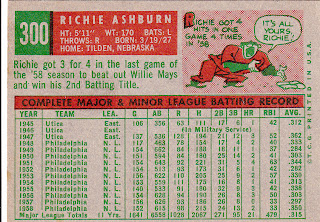 Richie Ashburn is one of six Hall of Famers born in Nebraska. The group consists of Bob Gibson, Wade Boggs, Sam Crawford, Grover Cleveland 'Pete' Alexander and Billy Southworth in addition to Ashburn.
Ashburn sandwiched a couple of years of burning up the Eastern League around a year of military service before breaking in with the Phillies in 1948. He batted .333 that year and led the NL in stolen bases. He finished third in Rookie of the Year voting.
He went on to have a great 12 year run as the Phils' centerfielder. He was a member of the 1950 Whiz Kids club that lost the Series to the Yankees. Through he career Ashburn played in the shadow of three great center fielders, Mickey Mantle, Willie Mays and Duke Snider. Except for the power those players possessed Ashburn was on a par with them in speed, average and roaming the outfield. He had the most hits of any player during the 1950s.
Traded to the Cubs in 1960 Ashburn played two seasons on the north side and was sold to the fledgling Mets for the 1962 season. He retired after a year in New York and soon went into broadcasting, a profession he had long had his eye on.
He broadcast Phils games from 1963 through his death in 1997. During that time he partnered with Bill Campbell, Byrum Saam and Harry Kalas. Baseball Almanac has a page of Richie Ashburn's quotes, most from his days in the booth. He was elected to the Hall by the Veterans' Committee in 1995.
I only saw Ashburn play in person once, as a Met in 1962. But the '59 card is how I (and most folks I'd expect) remember him. It's nice to see a picture in the set that wasn't taken in New York. Those red seats were a feature of Philadelphia's Connie Mack Stadium.
Posted by Commishbob at 6:52 AM