Categories and American League by Color

There are 572 cards in the '59 Topps baseball set. That doesn't take into account the card back variations like the included or not included 'optioned' or 'traded' line and the three different versions of the Spahn card back. Here we are interested only in the colors of the card fronts, especially the base card frames.

First, here is the total set by color of the base cards and the complete set listed by category: 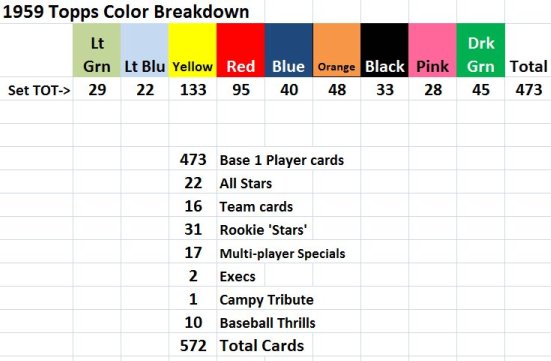 Yellow and red frames dominate the set. And by a wide margin obviously. Yellow is far ahead of second place red. And the 95 red cards are more than double the number of any other color. Between the two they represent about 48% of all the single player base cards.


And here is the American League broken down by color of the base one player cards: 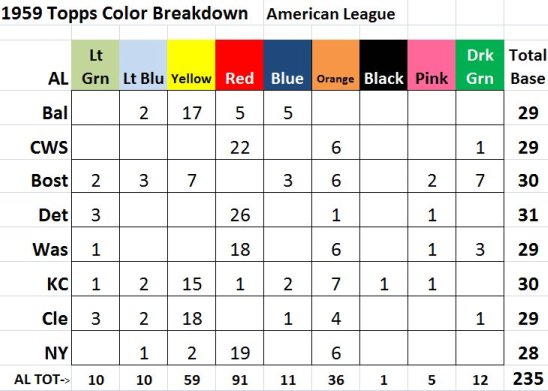 Interestingly, among the AL cards red is the dominant color and 91 of the 95 red cards in the whole set  are of AL players. Four clubs clearly have red as their dominant color. The Tigers, in fact, have only five of their 31 cards in a color other than red. Yet, of the remaining four clubs, two don't have a single red card and the A's have only one. Of those other four only the Red Sox are not primarily represented by yellow framed cards. The Bosox have no color that they can call their signature color in the '59 set.

AL observations.... Kansas City has the AL's only black frame and are the only team here that is represented by eight different colors. They lack a dark green card (ironically I think given their later history). They also are noteable in that there are six colors which appear on one or two of their players' cards.... the Yankees have the fewest total base cards (28). I'd have lost a bet on that one..... the White Sox have cards in only three different colors while the Orioles, Tigers and Yankees are seen with four....


This next chart tracks the colors of the team card (the frame is listed first, inner circle color next). It also shows the number of players each team has in the various subsets, All Star Selection, the Rookie Stars, Baseball Thrills (called High Lites in the chart's header), The center column gives the colors of the 'special multi-player cards (if they feature players from one specific team, called one team specials here). The same naming convention as the team card applies. 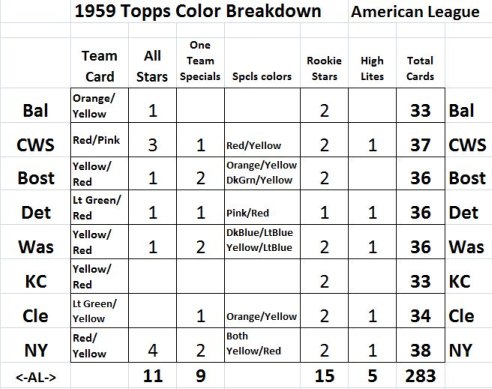 More AL observations... counting the specials the Yankees now have the most cards in the set of any AL club.... the White Sox total does not include the #156 Billy Pierce/Robin Roberts "Ace Hurlers". Counting that card would also give the ChiSox 38.... while it isn't too surprising that the Yanks had two multi-player special cards the fact that the Red Sox and Senators also have a pair of them probably is. Neither was a threat in the previous season, Boston was third, 13 games out and the Senators finished in last in '58, 31 games behind the Yanks.... every AL team card and all but one of the AL multi-player specials includes either yellow or red...

Next up: The National League
Posted by Commishbob at 9:47 AM