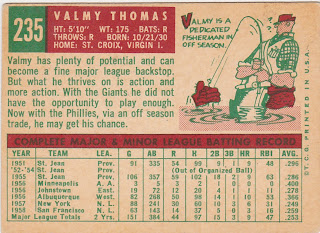 Oh, the stuff one learns. I was vaguely aware of Valmy Thomas only because he was once, briefly (8 games qualifies as 'briefly'), an Oriole. His home was the U.S. Virgin Islands although he was born in Santurce, Puerto Rico because his mother wanted what she believed would be better medical care. He's considered the first native of the Virgin Islands to play in the bigs.

Thomas, a catcher, played in Canada and across the Caribbean between the late 40's and 1951 when he played for the Pirates minor league club north of the border. A pay cut prompted him to 'retire' and he starred in the Dominican Republic for several seasons. SABR has a cool story of his years there online.

He emerged as a Giants farmhand in 1956 after a year back in Canada for the Pirate chain. He debuted in 1957 for the Giants in New York. He travel to the West Coast when the Giants moved and played for the Phillies, Orioles and Indians in the three subsequent years. By doing do he became the only player to play in five cities in five seasons.

After his playing days he was a successful businessman and public servant in his native Virgin Islands. He passed away in 2010 and was honored by the Congressional Delegate from his homeland. Here is another article which highlights his life and career.

One odd note.... Thomas was shot and nearly killed by another ballplayer in a dispute over a woman in 1962. The link goes to a Sarasota Herald story that's a real eye opener, in several ways.

I'm guessing that the picture of Valmy Thomas on his '59 card was taken while he was a member of the Giants. I'm fairly certain that the Los Angeles Coliseum provides the background. As with the Ruben Gomez card of a few days ago this one has been re-done with a Phillies cap and pinstripes. My scanner cut off the top of the card, it's not as miscut as it appears.

Here's Valmy in his later years. 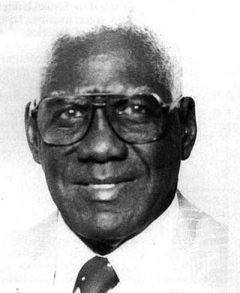 And I'd be remiss if I didn't mention Ellie Hendricks, another native of VI who became a catcher for the Orioles. Try and find and O's fan who didn't love Ellie. 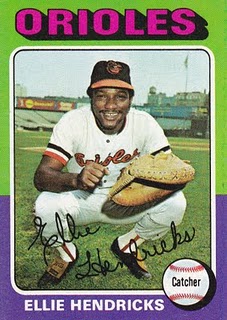 Posted by Commishbob at 8:30 AM