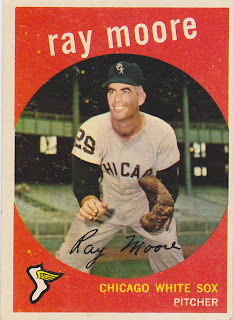 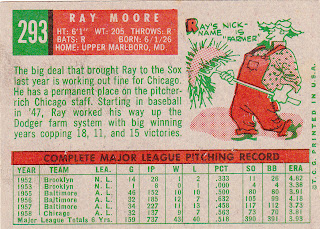 Right-hander Ray Moore, a Maryland native, was signed by the Dodgers in the mid-40s after being spotted playing ball with his army unit in the Philippines. But he had a long hill to climb in the talent-rich Brooklyn chain. He got looks in 1952 and '53 but it wasn't until he was traded to the Orioles for the 1955 season that he established himself in the bigs.
For three years as an Orioles Moore won double digit games, moving from a job as a spot starter and long reliever to a regular rotation spot in 1957. Traded to the White Sox in 1958 Moore transitioned back to a reliever role and appeared in one game of the '59 Series against the Dodgers, pitching one inning.
He was sold to the Senators midway through 1960 and spent the rest of his career with the Nats/Twins franchise as a better than average closer. He retired after the 1963 season and spent time farming and working with his favorite hounds.
Seeing another of the many red bordered White Sox cards reminds me of my task of cataloging the team/color ratios in this set. I started that once before. I'll get back to it soon.
Posted by Commishbob at 8:31 AM