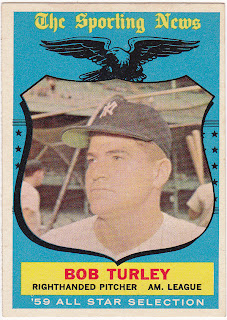 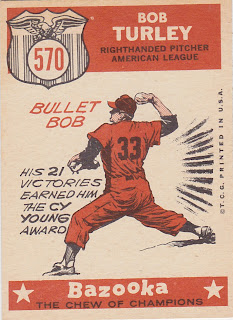 "Bullet Bob" Turley was coming off his best season when 1959 dawned. His exploits explain why he was selected to appear as the right handed pitcher for the AL All Star subset. But he didn't make the All Star squad that year and, in fact, his best pitching was behind him.

The '58 All Star game in Baltimore was his third and last. He was KO'd in the second inning having given up three hits, two walks and three runs in an inning and two thirds. But better things were in store for him in 1958. Those will be discussed in the next post.

The '59 card was his second straight appearance on one of these specials. He showed up as an All Star selection in the '58 Topps set. Defying almost all logic I prefer the '58 All Star cards. My '59 is about par for the course condition-wise., decent corners and somewhat mis-cut. 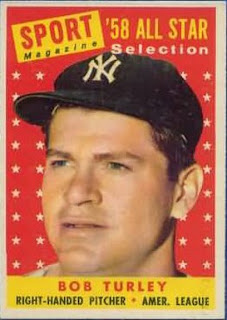