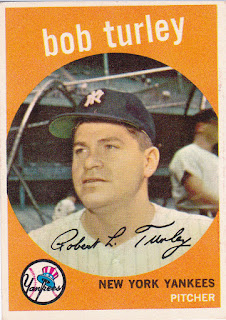 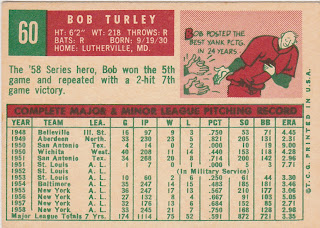 The back of Bob Turley's card hints at the remarkable 1958 season he enjoyed prior to this card being issued early in '59.
Turley had been a St. Louis Browns signee in 1948. He made his big league debut late in 1951 and was still with the team when they moved to Baltimore for 1954. He won 14 games for a very mediocre O's club that year including the first one ever played at Memorial Stadium.
In November of '54 he was traded to the Yankees in one of the largest trades (numbers wise) in baseball history. It was a fortunate deal for Turley who went on to pitch for five Yankee pennant winners and earned a pair of World Series wins.
His best season came in '58 as he won a career high 21 wins and 19 complete games. That led the league in both categories. He was named to the All Star team (see the last post) and won the Cy Young award. Turley's real heroics came in the Series that year versus the Braves. But it didn't seem that Turley would be a hero after his Game Two start when he was knocked around and run off in the first inning of a Braves laugher.
But he came back in Game Five to toss a fit hit shutout. After an off day he appeared in the tenth inning of Game Six and preserved a win for Ryne Duran. Then in the deciding Game Seven Turley relieved Don Larson in the third inning and held the Braves to two hits and a run to wrap up the title for the Yanks.
Although he stayed in the majors until he retired after splitting the 1963 season between the Angels and Red Sox, Turley never again approached the success he had in 1958. In fact he averaged about five wins a year after that magical season.
He spent a year coaching then went into the financial management business and was very successful. He lives in Georgia.
The orange frame on these '59s is always nice. Turley's picture, posed in pregame I assume, along the side of the Yankee Stadium batting cage is very much like the one used in his All Star Selection card. No need for Dick Tracy to see they were taken at the same session. This one is one of the better cards I have. Not mint by any means but the colors are bright and all but one corner is sharp.
Posted by Commishbob at 7:43 AM