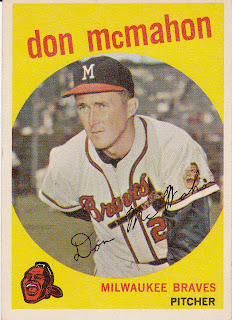 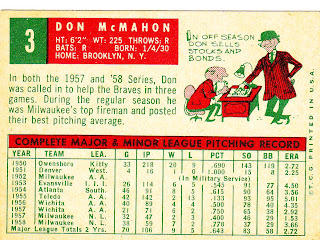 Don McMahon pitched in 874 major league games over 18 seasons.He made only two starts. He made his first save in 1957 and his last in 1974. His professional career ran from 1950 when he debuted with the Owensboro Oilers, the Class D Boston Braves affiliate in the K-I-T League, until he pitched a couple of innings for the Giants against the Dodgers in June of 1974. That's 25 seasons. I think that's pretty cool.
McMahon pitched for seven clubs over the course of his career and made the post-season with three of them. As a member of the Braves he pitched in the 1957 and '58 Series' against the Yankees. He was particularly effective in the '57 Classic, pitching 5 innings over three games and finishing all three. He never got a decision of a save in the post-season but he did come away with two rings, the second with the Tigers in 1968.
For his career McMahon was 90-68 with a 2.96 ERA and 153 saves. He led the NL with 15 saves in 1959. That speaks to how different pitching roles were back then. He had been an All Star the previous year but that was his only All Star selection. I think he deserved more.
Following his retirement as an active player McMahon served a pitching coach for the Giants, Twins and Indians for many years. He was a special assignments scout for the Dodgers after that.
McMahon died of a heart attack in 1987 at the age of only 57 while pitching batting practice at Dodger Stadium.
Posted by Commishbob at 8:39 AM