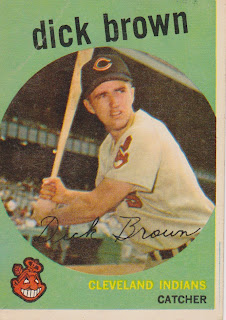 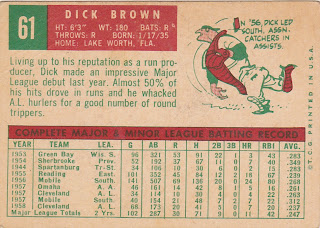 Dick Brown was signed by the Cleveland Indians in 1953 after attending Florida State University and made his debut with them four years later. In an interesting subplot, Brown was dating Herb Score's sister when Score was being signed by Cleveland and she is said to have suggested that the Indians sign Brown as well. He went on to play nine seasons in the big leagues for four clubs, all in the AL.
His busiest year was with the Tigers in 1962 when he caught 132 games and was 12/40/.241. Those numbers were down from the previous year when he had played fewer games.
He played as a platoon catcher for the next three years in Baltimore but was forced to retire from playing after he was diagnosed with a brain tumor following the 1965 season.
After some time spent scouting for the Orioles he passed away in April of 1970 at the age of 35. His brother Larry enjoyed a 12 season career in the American League from 1963 to 1974.
Other than being miscut this card is in pretty nice shape. My scanner didn't do it any favors.
Posted by Commishbob at 8:08 AM