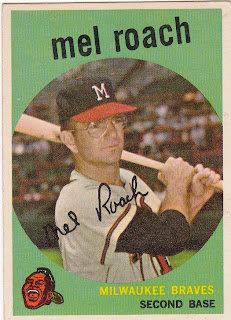 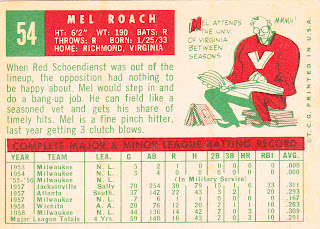 Mel Roach was a rare duel threat, a successful athlete in two sports who looked like he didn't belong in either. In addition to being a major leaguer for eight seasons after signing a bonus contract with Milwaukee, Roach was a college quarterback at the University of Virginia.
After he signed his Braves contract in 1953 he mostly sat on their bench and collected dust for two years. The rules at the time required a bonus signee remain on the big league roster. In two years Roach played in just eight games and came to bat six times. He did score a run once, and it was the winning run in the second game of a doubleheader against the Dodgers on August 6, 1953. Trailing 2-0 the Braves rallied in the bottom of the ninth. With two outs and two on Sid Gordon drew a walk to load the bases. Mel Roach was sent in to pinch run for him. Harry Hanebrink promptly tripled to clear the bases with Roach crossing the plate to end the game.
After a couple of years in the military Roach returned to play as a utility man and pinch hitter through the 1962 season. Most of that came with the Braves. He played for the Cubs in '61 after a trade from Milwaukee and, after passing through the Indians roster during that off season via a November deal, was dealt to the Phils in the spring of 1962, That year was his last in the majors.
He finished with seven homers and a .238 average. He was part of the Braves World Series championship club in 1957 although he didn't appear in any of the Series games.
This a a nice card. Good corners and it doesn't suffer from my collections 'mis-cut' curse. Plus the pale green border is cool. Best of all is the Braves "M" cap that Roach was lucky enough to wear.
Posted by Commishbob at 8:43 AM