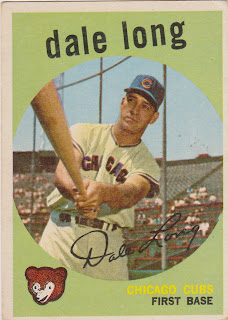 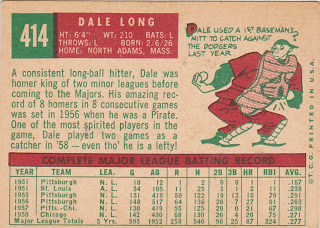 What a great baseball card. I love the perspective that makes Dale Long's bat loom into the foreground. The sig balancing Long's body, the fence behind him, the pale green border. It's one of my favorite cards profiled so far.

Dale Long probably went through several sets of luggage during his career. He played for six clubs and in the system of two others. In 1944 he played for Casey Stengel as a member of the minor league independent Milwaukee Brewers. He was property of the Reds, Red Sox, Tigers, and Yankees before he made his big league debut with the horrid 1951 Pirates. He was dealt to the equally horrid St Louis Browns mid-season.

Seems that Long was a 'bat for hire'  as he spent time with the Pirates (again), the Cubs, Giants, Yankees (again) the Senators and the Yankees (one more time).

Along the way he carved out a place in baseball lore by hitting homers in eight consecutive games (Don Mattingly has since equaled that) in 1956 and becoming one of the major's last left-handed catchers when he played for the Cubs in 1957.

1956 was Longs best season as he knocked out 27 homers and 91 RBIs. He played in a couple of World Series for the Yanks and got a ring in 1962. He retired after some final minor league duty in 1964 and went on to umpire in the minors. He served as a minor league executive as well.