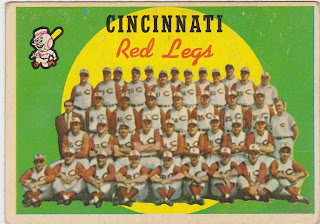 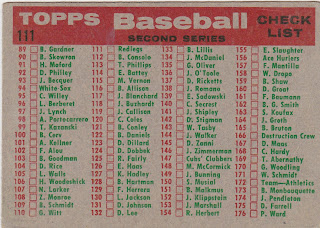 The 1959 Red Legs were the last of the Cincinnati clubs that used the 'Red Legs' moniker. The had adopted it in 1953 as a response to the McCarthy Era 'Red Scare' goings-on. The club switched back prior to the '59 season.
Whatever the case the 1959 Red Legs/Reds were a pretty ordinary team. They had some firepower with Frank Robinson, Vada Pinson and Gus Bell.
Their pitching was anchored by an aging Don Newcombe who teamed with Bob Purkey to win 26 between them.
Mayo Smith opened the season at the helm but, being 10 games below .500, was let go mid-year and replaced by Fred Hutchinson. 'Hutch' was able to squeeze a winning record out of his club over the second half and went on to become a  successful manager with the Reds winning the 1961 pennant.
Team cards have a certain charm I guess. I like the ones Topps produced a bit later that had club stats on the back. I especially liked the pitching record back cards. I was endlessly fascinated by stuff like how many times Dean Chance beat the Indians and similar arcane trivia. At least the checklist on the back of this one is unmarked.

NOTE: I had this scheduled for a future date but I'm pushing it through to try and clear the stray Ryan Callahan post that went up by mistake. That one still shows in the previews of this blog.

Posted by Commishbob at 4:37 PM