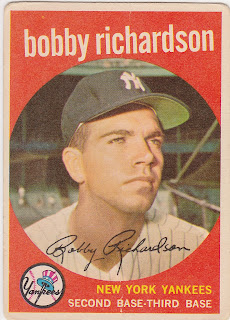 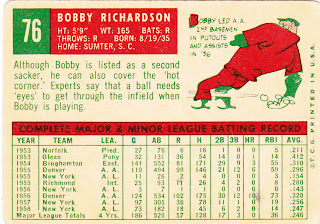 No matter how big a Yankee Hater you are I don't think you could find a reason to hate Bobby Richardson. I saw him signing autographs at a small card show in New Jersey some years ago and he was gracious and thoughtful with a smile and a word for every kid and grown-up in the line.
Richardson signed with the Yankees out of Sumpter, N.C. in 1953 and on the 700 Club website* he tells a story of arriving in New York as a green signee for a workout at Yankee Stadium:

I signed right out of high school when I was 17 and I was given a four day trip to New York to work out with the Yankees. Took the train from Sumter to New York. Checked into the hotel in New York. Took a cab out to Yankee Stadium. I was told to put on my uniform and walk out onto the field and take some balls out at second base and to take some batting swings in the batting cage before the ball game. Well, I took the ground balls at second, but I was too embarrassed to step in front of anybody in the batting cage, and Mickey Mantle came up and put his arm around me and said, “Come on kid, step in here and take some swings.”From that moment on, a special friendship between Mickey and Bobby developed. They played together until Bobby retired in 1966 after an 11-year career. They shared three World Series championships. Mickey always admired Bobby’s faith and the two remained close, long after their playing days.

His relationship with Mickey Mantle is a theme that runs though most of what you read about this solid fielding Yankee. He gave the eulogy at Mantle's funeral in 1995. After a few outstanding minor league seasons and a couple of peeks at the bigs he came up for good in 1957 and established himself as the everyday 2nd baseman by 1959.

Richardson's career included seven All Star appearances, five Gold Gloves, three Wold Series titles with a career .305 average in the Series, and despite the heartbreaking loss to the Pirates, the 1960 World Series MVP award.

I remember distinctly the snag he made off the bat of Willie McCovey that ended the 1962 Series when the Giants had the winning runners on.

My Richardson card is definitely on my 'upgrade needed' list. It's got very soft corners and some scuffs and discoloration. Even so it's one of my favorite cards in the set.