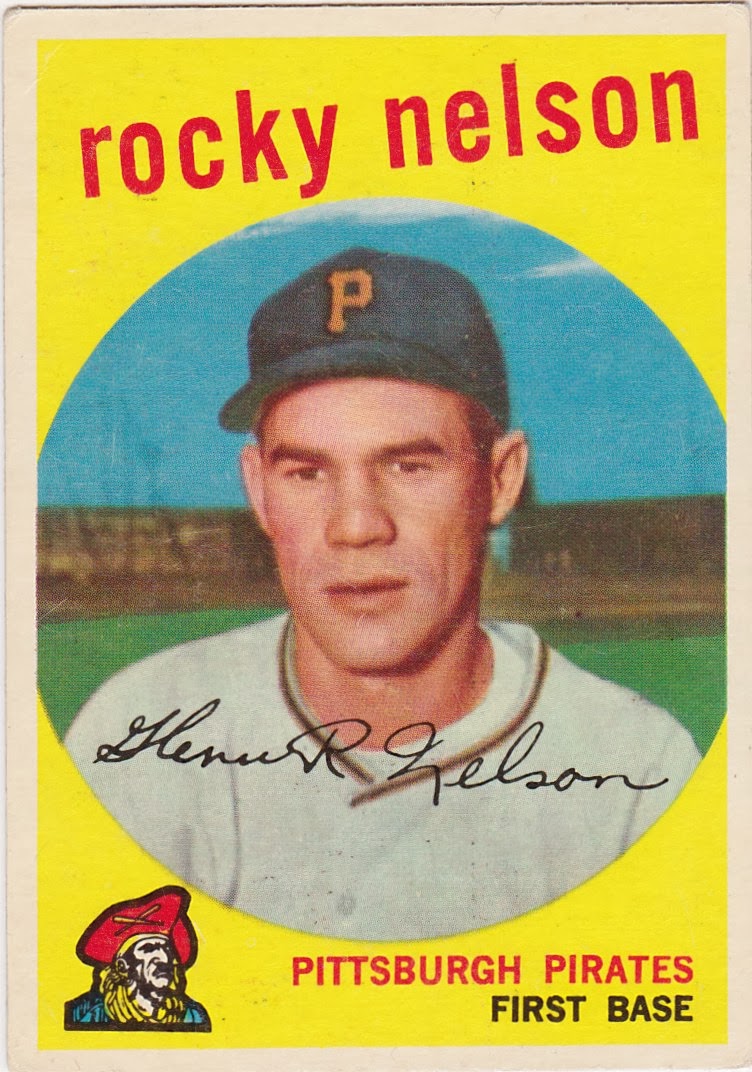 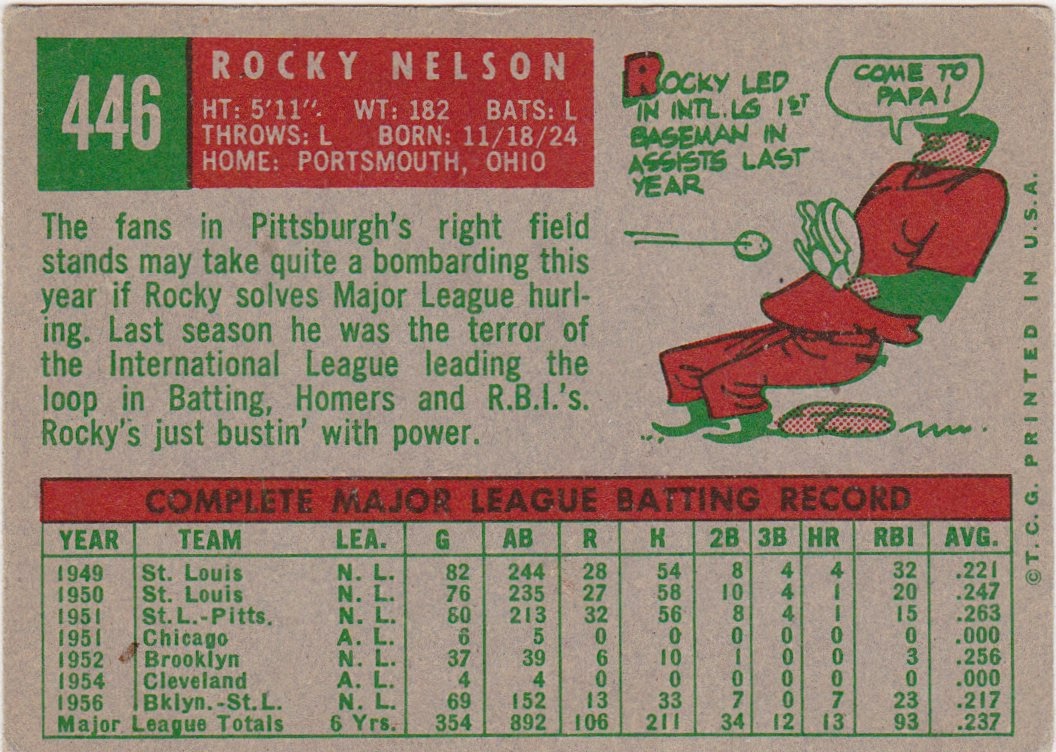 Glenn 'Rocky' Nelson had such a varied and interesting career I hardly know where to start, so let's try the beginning. Nelson signed with the St. Louis Cardinals as a 17 year-old first baseman in 1942. After a year in the minors Uncle Sam called and he spent three years in the Army during WWII. My usual sources don't provide many details but it's a good bet he was overseas during that time.

Upon re-entering baseball Nelson had three seasons in the well stocked Cardinals chain hitting over .300 in each of them. He made his big league debut with the Cards in 1949 but, in what became the story of his career, he just didn't approach his minor league numbers. He split the next season between the majors and minors (hitting over .400 at AAA in almost 50 games!) and in 1951 was traded to the Pirates for his first stint with the Buccos.

He finished the 1951 season with the White Sox after being waived and then was traded to the Dodgers after the season. That deal meant that Nelson had been the property of four different franchises within 9 months! The Dodgers won the NL pennant in 1952 and Nelson, having been recalled from the minors in August, got into the '52 Series with a handful of pinch hit opportunities.

He spent '53 and most of '54 with the Montreal Royals, the Dodgers' AA club and had a monstrous run. Particularly impressive was Nelson's 1953 season when he hit .308 with 36 homers and 131 RBIs and won the International League MVP award. The Dodgers, with Gil Hodges holding down first base, had no room at the top for the minor league slugger. They had traded him to the Indians after that remarkable '53 year but bought him back in May and watched him tear up the IL again.

Back with the Royals in 1955 Nelson won his second of three IL MVPs with impressive ease and was threatening to repeat in '56 when the Dodgers recalled him in June. He struggled for two months in Brooklyn and was traded to the Cardinals for his second run in St. Louis.

He played for Toronto, the Cards' AA club for two years and again excelled. He won the 1958 IL MVP and for that he was rewarded by being drafted away by the Pirates. Finally, at 34 years old, Nelson managed to get himself a steady big league gig. He played as a platoon first baseman for Pittsburgh for three seasons, putting together productive years in '59 and 1960. He played a part in the '60 Series against the Yanks. I'll let his Baseball Reference Bullpen page recount that:


Nelson started Game 2 of the 1960 World Series and had 2 singles against the New York Yankees' Bob Turley. But Stuart, who led the Pirates in home runs that year, started games 1, 3, 4, 5 and 6. With the series tied at 3 wins apiece and Stuart struggling with just 3 singles in 20 at-bats and no RBIs, manager Danny Murtaugh started Nelson at first base in Game 7, as the Yankees again started Turley. Nelson responded with a two-run home run in the 1st inning to stake the Pirates to an early lead. But he was also involved in a strange play that allowed the Yankees to tie the game 9-9 in the top of the 9th inning of that game. With the Pirates leading 9-8, Yogi Berra at bat, Gil McDougald on third base and Mickey Mantle on first, Berra hit a hard shot at Nelson. Nelson fielded the ball inches from first base and stepped on the bag for the second out as McDougald raced for the plate with the tying run. Mantle, with a short lead off first base, hesitated when the ball was hit, possibly unsure if Nelson caught it in the air. But although the ball had not been caught in the air, Mantle was not forced to advance to second base because Nelson had already eliminated the force when he stepped on the first base bag. Nelson turned to throw to second base, expecting Mantle to be advancing. But Mantle dove back toward first base. Nelson then dove at Mantle and missed. With both players sprawled on the ground and Mantle safely back at first base, McDougald scored the tying run to make the score 9-9. However, that changed quickly when Bill Mazeroski led off the bottom of the 9th inning with a home run against Ralph Terry to win the game, 10-9, and give the Pirates the championship. Stuart, who was on deck to pinch-hit for winning pitcher Harvey Haddix, did not appear in the game. At age 35, Nelson had his finest season in the majors and finished it by homering as the cleanup hitter in a championship game. Nelson hit .333 (3 for 9) in the World Series.

His bat finally failed him in 1961 and in '62 he kicked around the minors with three clubs before he retired. He finished his big league career with 31 homers but in the minors he hit 234 and in 1960 he was named to the International League Hall of Fame. Given that his huge seasons came with Montreal and Toronto it's little wonder he is also a member of the Canadian Baseball Hall of Fame. Along the way he played on four pennant winning teams, the '52 and '56 Dodgers, the '54 Indians and of course the 1960 Pirates.

Lots of interesting Nelson internet resources. The Hardball Times has a detailed and entertaining Rocky Nelson career retrospective. The official MiLB site has a page with emphasis on his minor league exploits.

The card has one of those 'painted over' portraits that makes it difficult (ok, impossible) to determine where it was taken and what uni Nelson is actually wearing.