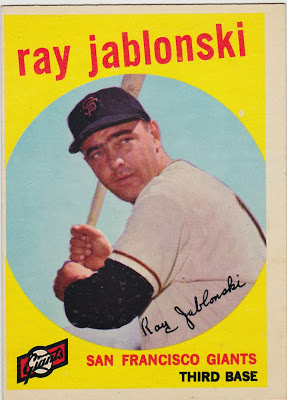 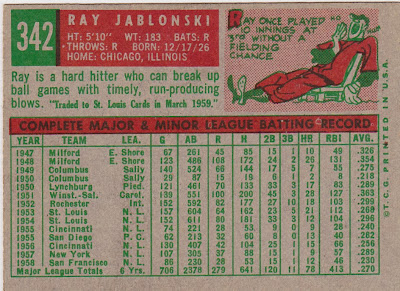 Ray Jablonski was a member of the Cardinals when this card was issued and that fact is noted on the back. In fact Jablonski did a lot of traveling during his career, something that is usually attributed to his lack of defensive ability.

He signed with the Red Sox in 1947 after a military term and played two years in the low minors before he was drafted away by the Cardinals. He bashed his way up the Cardinals minor league ladder and debuted as their regular third baseman in 1953. He had a sterling year with the bat slugging 23 doubles, 5 triples, 21 homers with 112 RBIs to go with a .268 average. He finished third in the Rookie of the Year balloting behind Junior Gilliam and Harvey Haddix. He came back the next year to make the All Star team with an improved batting average (.296) and nearly matching or improving in other categories. During his stay in St. Louis he was known as part of the 'Polish Falcons' a heavy hitting trio of Cards of Polish-American heritage including Rip Repulski and Steve Bilko.

But his fielding deficiencies and the emergence of a young Ken Boyer prompted a trade that sent Jablonski to that Reds. He split time between AAA ball and the Reds in 1955 and had decent numbers in '56 but again found himself on the move. He was dealt to the Cubs after the '56 season. He made it known that he was thrilled to get a chance to play in his hometown of Chicago but he was dealt on to the New York Giants before the 1957 season could get underway. He hit .289 for the Giants but his numbers tailed off in '58 and he was traded to the Cardinals. That deal also sent Bill White to St. Louis so the fact that Jablonski only lasted until August before being waived is just a footnote.

The Athletics claimed him and he played in K.C. for parts of '59 and 1960 before finishing his career with some power hitting minor league seasons through 1964. In 1961 he hit the first homer for the newly formed Hawaii Islanders who were affiliated with the A's.