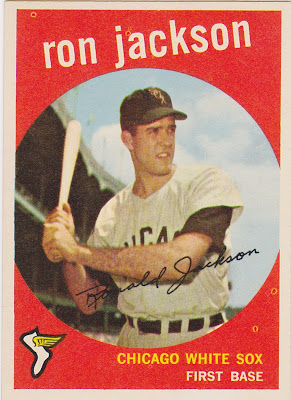 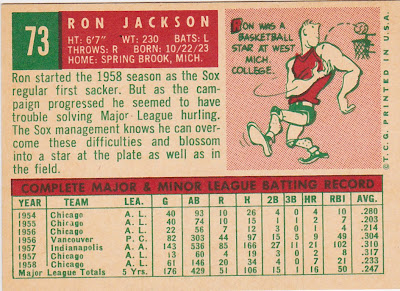 The 6'7" Ron Jackson was a basketball star in high school and continued his hoops prowess at Western Michigan University in his hometown of Kalamazoo MI.

Jackson was also a big enough baseball prospect to be signed as a 'bonus baby' by the Chicago White Sox in 1954. As such he was required to remain on the roster for two seasons and in his first year with the Sox he hit .280 in 40 games. In '55 he again played 40 games but his numbers were disappointing and  beginning in 1956 he was bouncing back and forth between the Sox and the minors through 1959.

Traded to the Red Sox he got into only ten games in '60 and spent most of that year and the next again in the minors. He retired at age 28 to go into the insurance business. He died of pancreatic cancer in 2008.

The Kalamazoo Gazette, Jackson's hometown newspaper, ran a tribute to Jackson after his death. It touches on his character, his two sport career and has memories from his family. It's a nice read.

This is another in a string of nicely preserved cards that I've been posting. Not exactly 'pack fresh', but pretty darn close. And there are those Yankee Stadium pennants again.
Posted by Commishbob at 6:30 AM