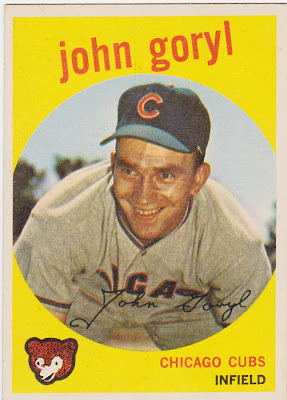 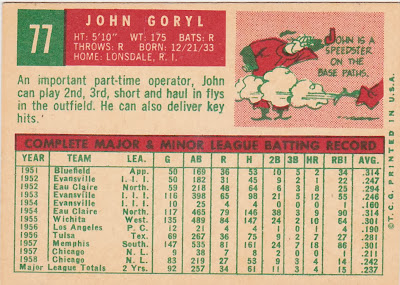 What do Paul Konerko, Gabby Hartnett, Davey Lopes, Hugh Duffy, Nap Lajoie and baseball lifer Johnny Goryl have in common? They were all born in Rhode Island. Now you know.

Goryl played seven seasons in the minors for three different organisations before he got a late season look from the Cubs in September of 1957. In his first game in the majors he batted lead off for the Cubs facing Warren Spahn. He whiffed, grounded out and drew a walk against the future Hall of Famer. Later he singled and scored a run.

He saw action in about half the Cubs' games in 1958 as either a second- or third- baseman. He played some in '59 as well but spent most of the season in the minors. A trade to the Dodgers led to a couple more seasons in the minors before he was drafted by the Twins in 1962.

He played sparingly in Minnesota and transitioned into his role as a coach, manager and eventually into numerous jobs in the front offices of the Twins and Indians. He managed the Twins for parts of the '80 and '81 seasons. He was honored last winter for his lifetime of work in the game, receiving the Mike Coolbaugh Award. He continues working for the Indians.

This card is one of several among a group cued for posting that are nearly 'pack fresh', or at least as fresh as a 54-year-old card can be. Corners are sharp, front is glossy and only a little yellowing of the back gives away the vintage-ness.