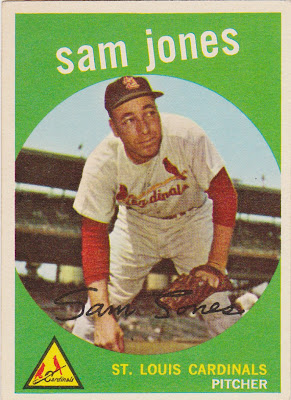 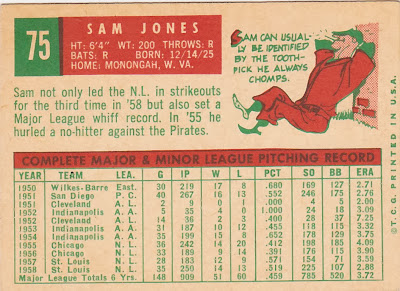 Sam Jones was signed by the Indians in 1950 and put up some very impressive minor league numbers for the next four seasons. But in his one extended trial in the bigs he was hit pretty hard. The Indians dealt him to the Cubs as the '54 season ended in a somewhat complicated trade that Baseball Reference tracks like this:

Someone diagram that one for me, please.

The tall right-hander, known as 'Toothpick Sam' (see the card's cartoon) and 'Sad Sam' Jones, took a spot in the Cubs rotation in '55 and went on to lose 20 games for a sub-.500 club. Against the Pirates on May 12 of that year he became the first African-American pitcher to throw a major league no-hitter. He walked seven in that game and survived a crazy ninth inning in which he walked the bases loaded with a wild pitch sandwiched in and then proceeded to strike out Dick Groat, Roberto Clemente and Frank Thomas to end it. The next year the Cubs were horrendous and Jones went 9-14.

Traded to the Cardinals Jones found better support and won 26 games in two seasons. He had a fine '58 season winning 14 games with a 2.88 ERA and leading the league in strikeouts. Perhaps thinking they had wrung all they could out of the vet the Cards traded Jones to the Giants.

In San Francisco in '59 Jones won a career high 21 games and had a league leading ERA. He won 18 games in 1960 but slipped badly in 1961 and the Giants were transitioning him to the bullpen. He spent the next five seasons working for several organizations and bouncing between the majors and the minors. He was working as a pitching coach and player when he pitched his last game in 1967 in the Pirates chain. Jones died just four years after he retired,

During his career Jones developed a reputation as a headhunter but he denied it. He did lead the lead in hit batters in 1955. His hard breaking curve helped him with three strikeout crowns but his wildness meant he also led the league in walks four times. He was a veteran of both the Negro Leagues and several Caribbean Leagues as well.

A fascinating character, Sam Jones' story is told well on his SABR bio page. It chronicles his early life and how he came to get the name 'Samuel Jones' after being born as Daniel Pore Franklin.