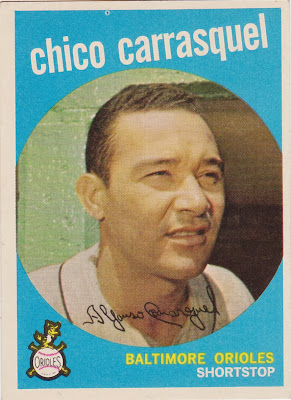 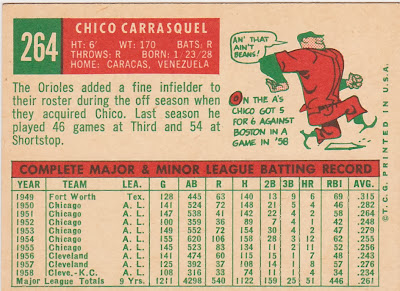 Shortstop Alfonso 'Chico' Carrasquel, one of the first Venezuelan players to play in the majors, was the first Hispanic player to start in an All Star game. That came in his second season, 1951 when he beat out Phil Rizzuto for the slot.

His rookie season of 1950 saw Carrasquel hit .282 and he was third in the Rookie of the Year voting. That average turned out to be a career high but he hit well enough to keep the White Sox shortstop job where he teamed with Nellie Fox to form a slick DP pairing for six seasons before his 1957 trade to the Indians. A trade prompted, at least in part, to open the job at starting shortstop for fellow Venezuelan Luis Aparicio.

Carrasquel had been signed by the Dodgers out his hometown of Caracas but was unlikely to supplant Pee Wee Reese with the Dodgers so he was sold to the Sox after a year in the Dodger train. In total he made four All Star squads with the Sox and consistently ranked at or near the top of the AL in fielding categories.

After his trade to the Indians Carrasquel played another three seasons as a regular (or close to it). As his numbers declined he played for the A's and finally the Orioles in his final year, 1959. He was signed in the following off season by the White Sox but was released prior to the opener. He signed with the Dodgers and spent the year with their AAA club in Montreal. The White Sox--->Dodgers ending to his career gives it a nice 'Bell Curve' sort of feel.

When his playing days ended he coached and managed in his native country and scouted for the White Sox. He later was their Spanish language broadcaster.

In this short Chicago Tribune interview Carrasquel discusses his career and his carjacking in Valenzuela in 2003. His 2005 New York Times obituary contains tributes from teammates and others that speak to Carrasquel's influence and talent.

I never like Oriole players depicted in anything other than the proud orange and black so here are a handful of Carrasquel photos from 1959, his only season in Charm City. 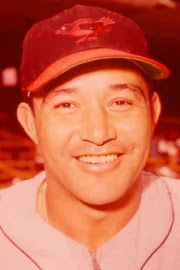 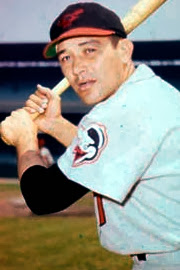 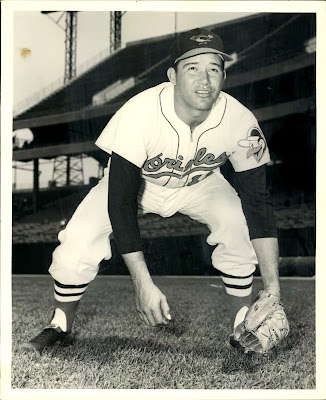