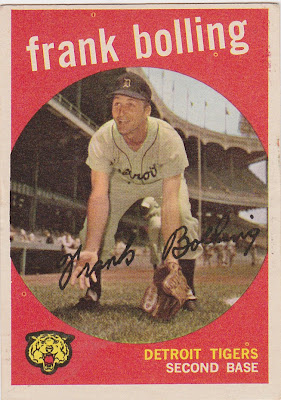 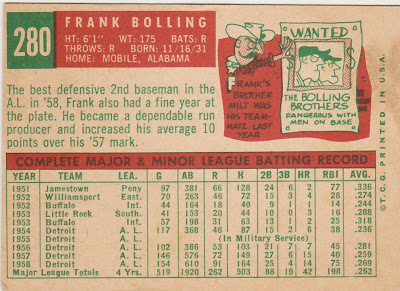 Lots and lots to love about Frank Bolling's card. Great panorama of the third base side of Yankee Stadium behind him, the facade, flagpoles, grandstands. Great stuff there. Then flip the card over and you get a cartoon that very different than most of the others in the set. 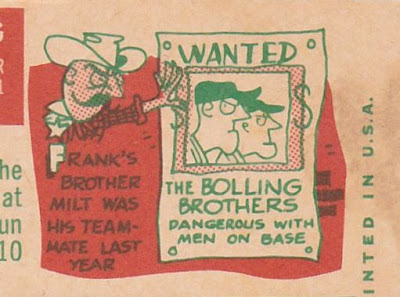 Isn't that cool? Probably hyperbole given the fact that Frank's bother Milt had 94 RBI in seven big league seasons, but hey, Frank was a pretty good RBI guy for a second baseman in that era.

The Tigers signed Frank Bolling out of Alabama in 1951 and watched as he showed himself to be a good all around infielder for three seasons in the minors. He made the big club as a starter in 1954 then was in the service for a little over a year. After returning in June of 1956 he spent five seasons as the teams 2nd baseman and displayed a decent average and good power. He averaged over ten homers and 50 ribbies a season.

Traded to the Braves in 1961 Bolling spent almost an equal amount of time as the starter in Milwaukee (and Atlanta in the team's first year there). He had his only two All Star appearances in his first two seasons with the Braves.

He retired after the 1966 season having played every inning of his career at 2nd base. After he retired, Bolling returned to his native Mobile, AL, where he got involved in charity work and started a baseball league for physically or mentally challenged youth, the Frank Bolling Adaptive Baseball League.

This book about the history of baseball in Mobile, Alabama has an entertaining chapter on the Bolling brothers. The link takes yo to a spot a page or so into the chapter.