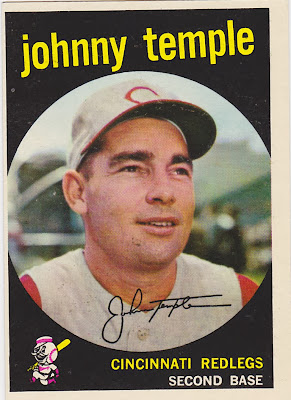 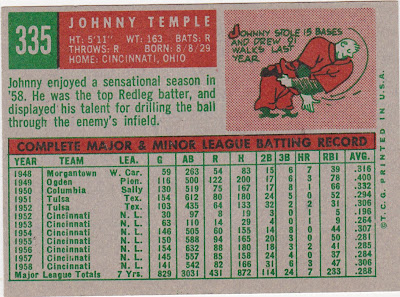 Johnny Temple signed with the Reds in 1948. There is a bit of mystery concerning his short time at Catawba College in North Carolina, his Navy stint, his real hometown and his actual age when he signed.  The whole convoluted story is chronicled here.

Be that as it may, once he started in pro ball Temple charged through the Reds system hitting very well and displaying an outstanding glove. His minor league credentials earned him a shot with the Reds in 1952 but he struggled. Returned to the minors in June, Temple again showed a good bat and he was called back to the Reds later in the season. He had a bit more success in that stint and by 1953 he was the Reds' starting second-baseman, a spot he held for seven seasons.

Temple teamed up with Roy McMillan and the pair made a formidable DP combo for the club. Temple also found his bat and in seven years with the Reds he hit .291, made three All Star teams and annually ended up first or second in stolen base percentage. His time in Cincy was marked by some well publicized brawls. His spark was coveted by the Indians and after the '59 season they dealt for him.

He spent a bit more than 2 seasons in Cleveland, making the All Star squad in 1961. He bounced from Cleveland to Baltimore and finally back to the Reds as a player/coach in 1964. The end of his second term as a Red came when he got into a huge fight with a fellow coach.

His problems continued after his retirement as he faced the results of bad investments and several legal issues before he passed away in 1994. He's a member of the Reds' Hall of Fame.