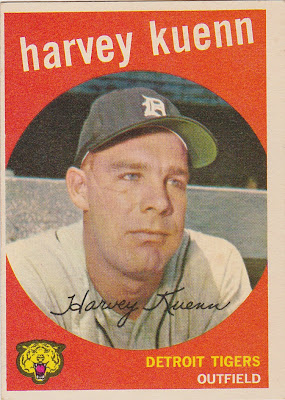 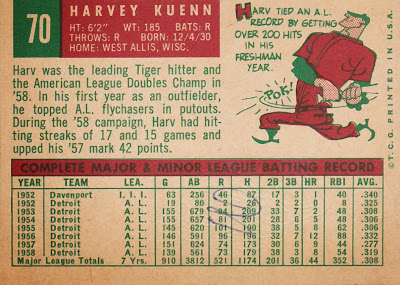 Note: This and the next few posts will be rather short and sweet as I am currently on the road between Houston an Lincoln, Nebraska on family business and putting these together on the fly.

Harvey Kuenn spent a mere 63 games in the minors before the Tigers decided he had what it took to play as a big league shortstop and called him up for an 18 game trial in 1952. Hitting .340, even at the 'B' league level, will do that.

Kuenn made the Tigers starting lineup in 1953 and never looked back. That year he led the league in hits as a rookie, won Rookie of the Year honors and made the first of his eight straight AL All Star squads.

In eight seasons in Detroit he hit .314 , led the league in hits four times, in doubles three times and won the 1959 AL batting crown with a .353 average. It's what happened next that is the pivotal point in his career.

On the eve of the 1960 season Kuenn was traded to Cleveland for the Indians' immensely popular Rocky Colavito. It was a trade that shook two cities to their baseball roots. Rather than reinvent the wheel I'll refer you to this interesting write up and recap of the circumstances surrounding the deal and it's aftermath. In a nutshell, Indian fans were not happy with GM "Trader' Frank Lane.

Kuenn played only one season for the Indians, was dealt to the Giants where he played in the 1962 World Series and then faded from the scene as a player after short stints with the Cubs and Phils.

Kuenn later managed the Milwaukee Brewers for a couple of seasons. His powerful hitting clubs were nicknamed Harvey's Wallbangers and they won the 1982 AL pennant.

Kuenn died at the age of 57 after suffering from several bouts of ill health, Here is his NY Times obit. And here is his SABR bio.

Kuenn's card here is rather off center and suffers from a ink 'inscription' I hadn't noticed in my occasional trips through my set album in search of upgradable '59s. Stray ink on the back, while less than ideal, isn't a 'card killer' for me, especially when the overall condition is as decent as this card is.
Posted by Commishbob at 6:30 AM