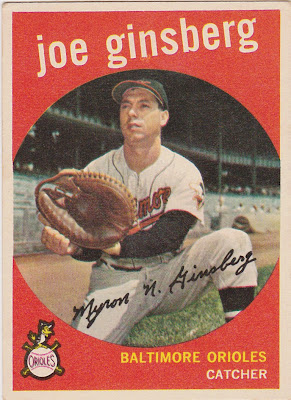 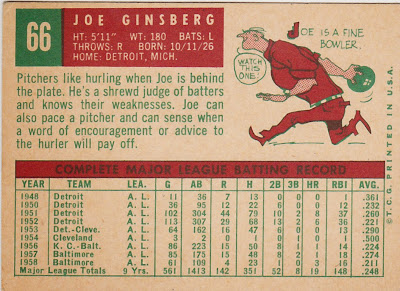 Note: This and the next few posts will be rather short and sweet as I am currently on the road between Houston an Lincoln, Nebraska on family business and putting these together on the fly.

Born and raised in Detroit, Joe Ginsberg was actually named Myron but he was called 'Little Joe' much of his early life (his Dad's name was Joe) and 'Joe' stuck with him throughout his career. His sig on this card reflects his real given name.

He played for the Indians and Athletics before finding himself in Baltimore from 1956 through early in 1960 where he was, at least at times, a platoon catcher. After his time with the Birds he played for the Red Sox, White Sox and, for a few games, with the original Mets club in 1962.