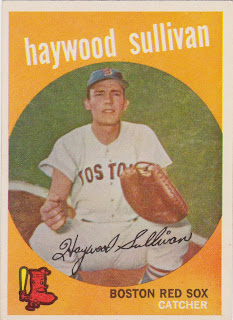 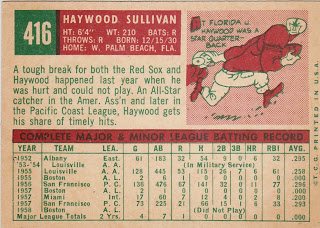 Note: This post will be rather short and sweet as I am currently on the road between Houston an Lincoln, Nebraska on family business and putting it together on the fly.

Whoever wrote Haywood Sullivan's Baseball Reference Bullpen page bio was not a fan of his:

Haywood Sullivan played in the majors from 1955-63, primarily as a catcher. While he spent four years with the Boston Red Sox and only three with the Kansas City Athletics, he had 718 of his lifetime 851 at-bats with the Athletics. He also managed the Athletics for most of the 1965 season.

Sullivan was General Manager and part owner (with Jean Yawkey) of the Boston Red Sox 1978-83. Sullivan had been assistant GM of the Red Sox from 1966 to 1977. He essentially inherited a contending team in the late 70's including the 99 win 1978 Red Sox.

In his time as GM he traded popular players Rick Burleson, Butch Hobson and Fred Lynn and lost Carlton Fisk to free agency when he failed to offer Fisk a contract before a deadline. He then brought in over the hill stars like Joe Rudi and Tony Perez who along with 43 year old Carl Yastrzemski were well equipped to compete with the 1983 Phillies for oldest team honors. He also drafted and brought to the majors, his son, catcher Marc Sullivan.

On the plus side for Sullivan he did acquire batting champion Carney Lansford who he then traded to Oakland for home run champion Tony Armas. Following the 1983 season, in which the Red Sox were 78-84, Sullivan was replaced by Lou Gorman as GM of the club after a dispute with fellow owner Buddy Leroux.


Not much I can add to that other than the fact that he was a start football quarterback at the University of Florida in addition to playing baseball there. He was a draftee of the Washington Senators expansion franchise in December of 1960 off the Sox roster. The Nats traded him to the Athletics a few weeks later.

Despite his issues in the Sox' front office and as part-owner, he is a member of their Hall of Fame.
Posted by Commishbob at 6:30 AM