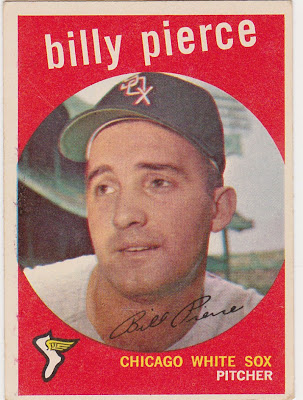 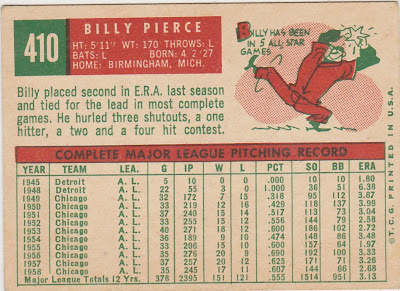 This is the fourth card featuring White Sox lefty Billy Pierce that I've posted out of this set. And it's the last. First up was a look at the special card ( #156 Ace Hurlers) he shared with Robin Roberts and a little detective work into the background of the picture Topps used. Then came his card in the Baseball Thrills subset (#466 Pierce All Star Starter) and soon after was his '59 Sporting News All Star card (#572 Billy Pierce '59 All Star Selection). This one is obviously his regular card.

While I like any card with the Yankee Stadium background this is far from the best Billy Pierce card issued during his career. He's one of those guys who, like fellow lefty Whitey Ford, was always referred to as 'the crafty...' or 'the stylish..(insert name)'. I don't know what it was about those guys that made them 'stylish', or even what it means exactly. I do know that there are a bunch of really cool pictures of Pierce floating around. I have a Pierce card collection and I'll post some of them on my 5 Tool blog and at the bottom of this post will be a couple of the pics I found.

Pierce, a Detroit native, was a Tigers signee in 1945. He opened the season on the Tiger staff for six weeks but didn't get into a game. Sent to the minors he returned to the big club before the season ended and pitched in Fenway Park in his first game. He was with the team when they won the World Series that season. He was eligible for and received a Series champs ring despite pitching only 10 innings in the majors all year. He was 18 years old.

He was hurt for a good part of '46 and pitched in the minors in 1947 before making the club again in '48 but he was hardly used and his numbers were atrocious. Being traded to the White Sox that winter proved a turning point and he went on to have an exceptional 13 year career for the Sox. He won 186 games for a team that was climbing steadily out of the doldrums during the 50's. They broke trhough to play in the 1959 World Series but lost to the Dodgers. Pierce, a 14 game winner who was injured late in the season, was put in the bullpen for the Series. He allowed just two hits in four innings of work.

After two more winning seasons on the South Side Pierce was traded to the Giants where he finished out his career. He had a sterling 1962 season, winning 16 games and helping the Giants reach the World Series. He started two games and pitched very well but split his two decisions. He finished third in Cy Young voting in the NL that season. Pierce retired after the 1964 season with 211 career wins and an ERA of 3.27 in 18 seasons.

The best Pierce ever did in Hall of Fame voting was less than 2% of the votes back in 1971. I'm not saying he should have made it but 2%? That's just silly. The JAWS ranking of all starting pitchers puts him 96th at the moment. That's ahead of ten Hall of Famers including Chief Bender, Dizzy Dean and far ahead of Catfish Hunter.

The SABR site has some great nuggets of info in the Pierce bio page and this Chicago news website has a neat story linking Billy Pierce and former Sox perfect game pitcher Mark Buehrle.

And here at a few nice shots of the 'crafty & stylish' lefty found on the 'net: 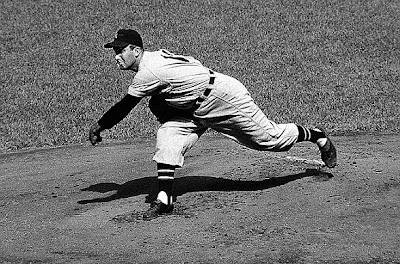 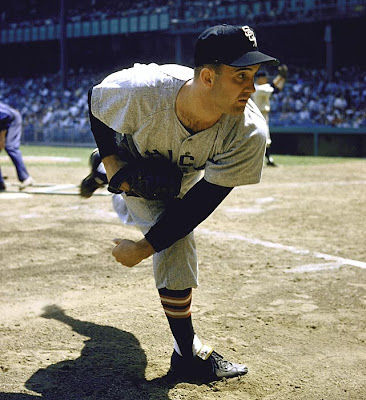 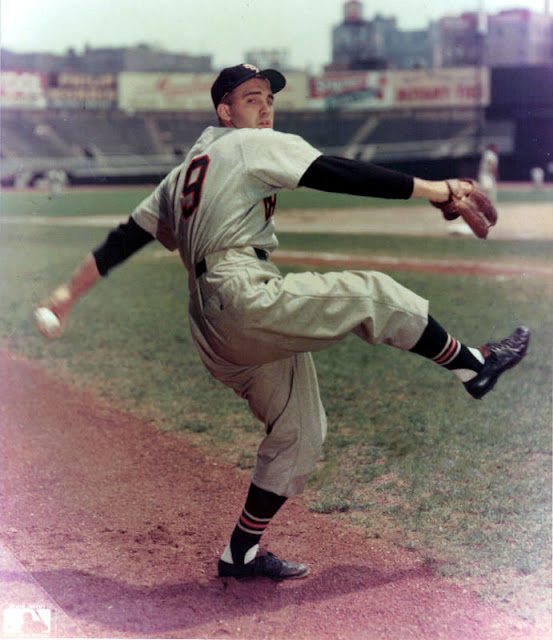