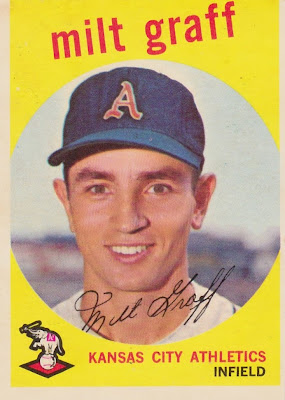 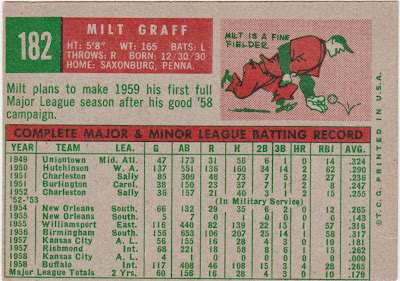 Yes, this is another nifty, excellent conditioned '59. Off-center as all get out but that is more the rule than the exception I think, at least among my '59s.

Second baseman Milt Graff was signed by the Pirates out of Penn State in 1949 and he proceeded to toil in the Pirates' and Yankees' chains, when he wasn't toiling for Uncle Sam, until he was dealt to the (surprise!) Athletics in February of 1957. He'd shown some real hitting potential in the minors with several seasons of .300+ averages.

But with the A's in '57, after opening the season as a regular, he wasn't able to solve major league pitching and played most of that year back in AAA. After one more at bat in '58 Graff spent six more seasons in the minors before retiring as a player.

He went on to work in baseball after getting an accounting degree. According to Baseball Reference some of the baseball jobs he held assistant general manager and Scouting Director for the Pittsburgh Pirates, infield coach for the Pirates and director of stadium operations at Three Rivers Stadium. He served as a scout for the Pirates, San Francisco Giants and Cincinnati Reds.

He died in Rockdale, Texas in 2005 having migrated to that state earlier. His son, Steve Graff a.k.a "Coach Graffie",  is a former minor leaguer and  major league coach. He now coaches amateur baseball in central Texas.
Posted by Commishbob at 6:00 AM